I've been doing a lot of canning lately.  Apples have been a great price at the market and so tasty this time of year!  I just want to jar them all up and save them for a cold and rainy day.  I wanted to share a few recipes that I've tried with all of you in case you're wanting to can all the apples too :)

For all of these recipes I used Gala apples, which are one of my favorite varieties anyway, but have been 78 cents a pound!  I'm sharing links to all of the recipes I found on Pinterest--these are not my personal recipes so I won't infringe on their creator's intellectual property and reproduce them here.  Just click through to see the recipe for yourself :)  The pictures of the jams are all my finished products though.

So I started on Wednesday with Apple Pie Jam.  I wanted to try two different recipes this day so I chose one with a smaller yield for the sake of time.  You could easily double or triple it if you have a big enough pot. 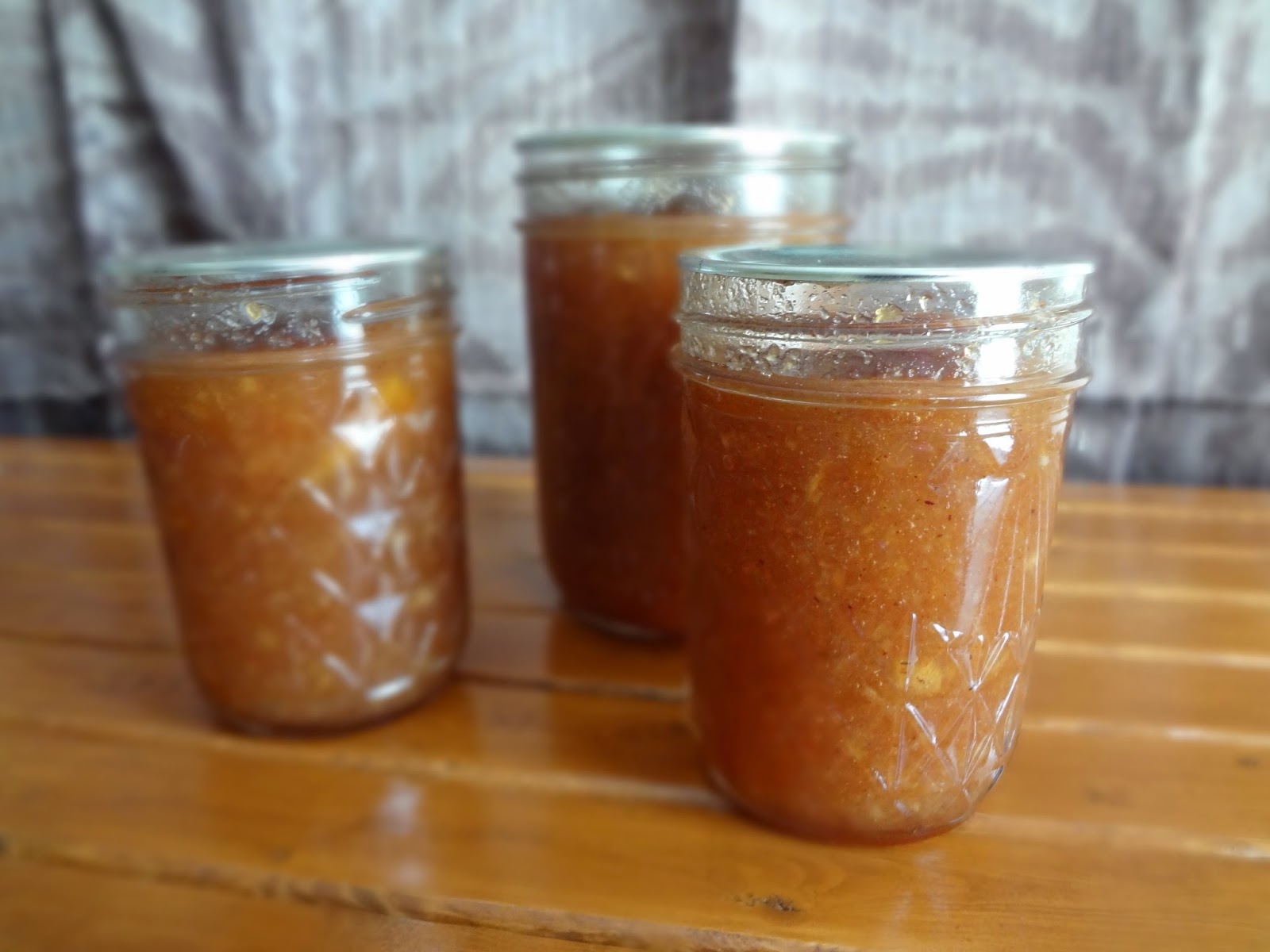 I used an immersion blender to purée the apples once they were cooked down.  I liked the addition of just a little liquid pectin--the finished jam has a nice texture without being too firm.  It spreads nicely on toast. :)

The second recipe for Wednesday came from a post containing 4 recipes that all look great.  I only had all of the ingredients on hand for this particular one (the last in the post) but I want to try some of the others another time.  I chose to do Honey Lemon Apple Jam.  This is a lovely twist on apple preserves with the addition of the floral honey and tangy lemon juice.  I chose a variety of orange blossom honey and the flavor characteristics definitely come through in the finished jam.  I also got to use my immersion blender on this one for a more uniform product. 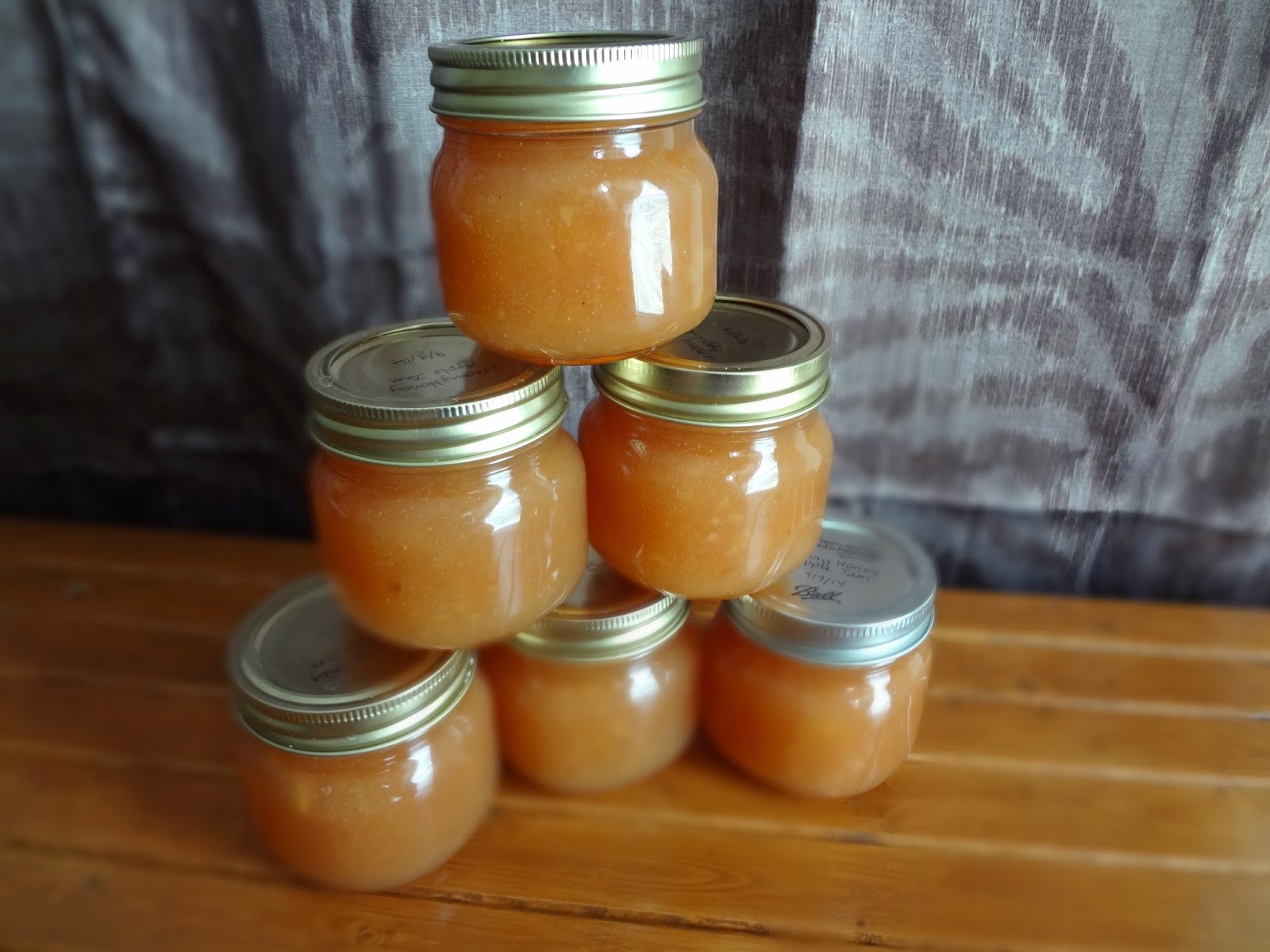 But even doing both of those recipes, I still hadn't exhausted the 13 lbs of apples from the store.  So Thursday I did a batch of Canned Apple Pie Filling.  I didn't have some of the ingredients, but I improvised, using the recipe as a guideline.  I'll include my updates below.  I washed and sanitized 5 quart jars.  Using the apple corer peeler slicer contraption I borrowed from my friend, I was able to quickly peel, core and spiral slice about 3 apples per jar.  I cut the spiraled apples into 8ths and packed the jars to the neck.  Even though I had started the syrup mixture way in advance, mine didn't seem to cook down as much as I would have liked.  I went ahead and filled the jars up with the syrup so the apples wouldn't brown, but I imagine I'll have to mix in a little cornstarch slurry when I go to make up pies to thicken the sauce.  Next time I'll start even earlier to get a thicker syrup.  And I found that this recipe needs more headspace than other types I've done.  I had issues with the syrup leaking out and the lids not sealing properly, so this batch got processed twice.  Next time I'll only fill them  up to the 'shoulder' part so there will be enough space to expand. 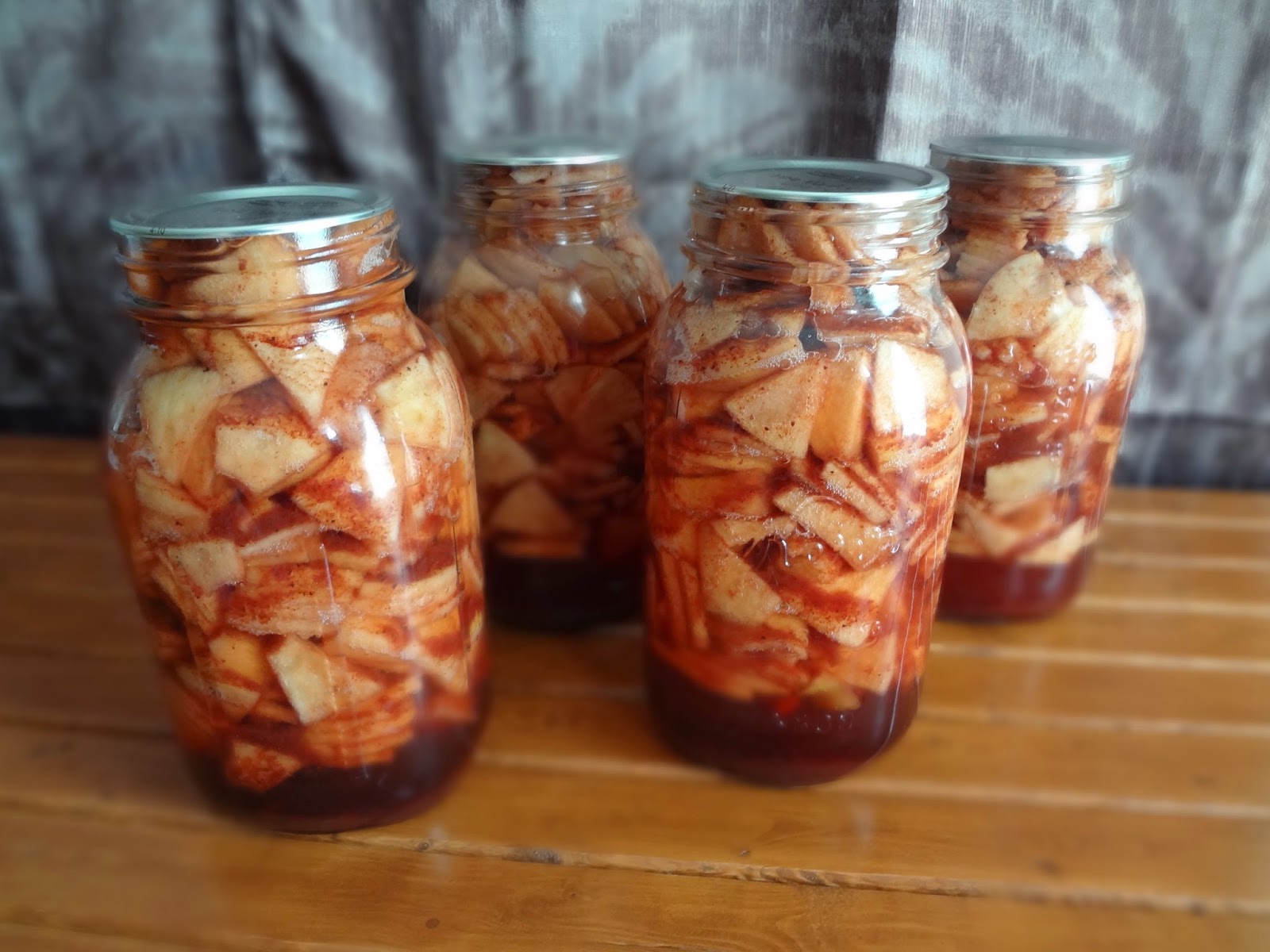 My syrup recipe (based on the one I linked, but modified because I didn't have all of the ingredients)

I put all the ingredients in a large pot and brought it to a boil, then simmered, stirring occasionally to reduce.  This made just about the right amount for 5 quarts.  If it had reduced a bit more it would have been spot on!

Even with the double processing, one of the lids didn't seal...but there was no reason to be upset!  We just made an apple pie the next day with that pesky jar.  I mixed up a simple shortening crust and pressed it into my small stoneware dish while we warmed up the apples in a saucepan and added a little cornstarch (mixed with cold water so it wouldn't clump).  I baked the empty crust for about 12 minutes (pricked with a fork first), filled it with the warmed apples and thickened sauce and topped it with a streusle topping (Michael's own creation--brown sugar, oats, flour, cold butter, cinnamon I think?)  Then it went back in the oven for 15 minutes or so.  And we may have cut into it before I took a picture...but either way, it was delicious! 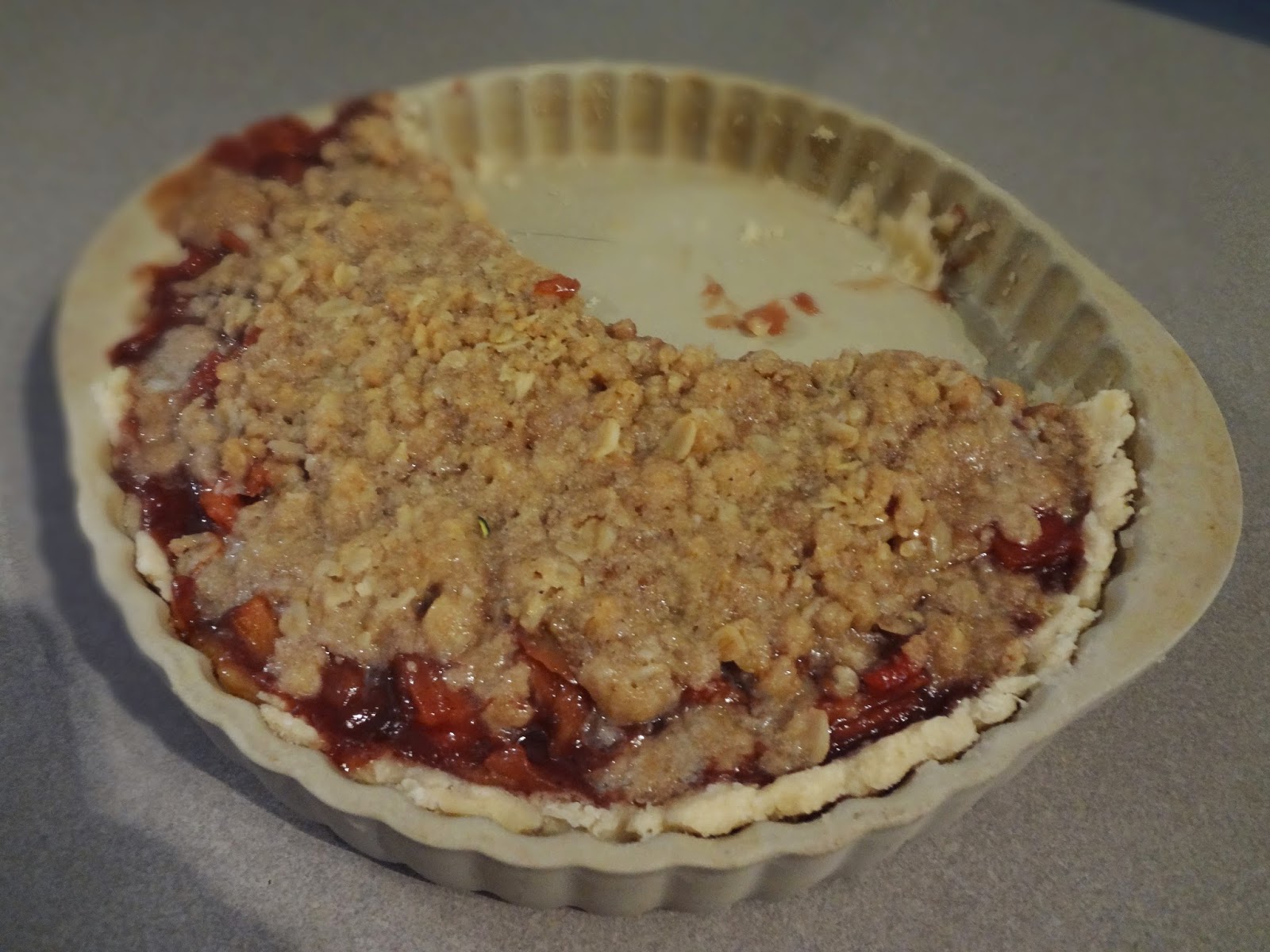 The final canning recipe I attempted was Apple Core & Peeling Jelly.  I saved all the peels and cores from the pie filling apples and just added water and simmered.  I strained the liquid through a cheese cloth and followed the rest of the directions, omitting the food coloring.  It's such a lovely color, I didn't think it needed anything else.  I was running a little short on sugar by this time, so I may not have gotten the whole 9 cups in there... The jelly still hasn't "gelled" yet, but according to the pectin box it can take several days for it to set, so the jury is still out on this recipe.  It's very tasty, and it's definitely a "user error" issue ;) 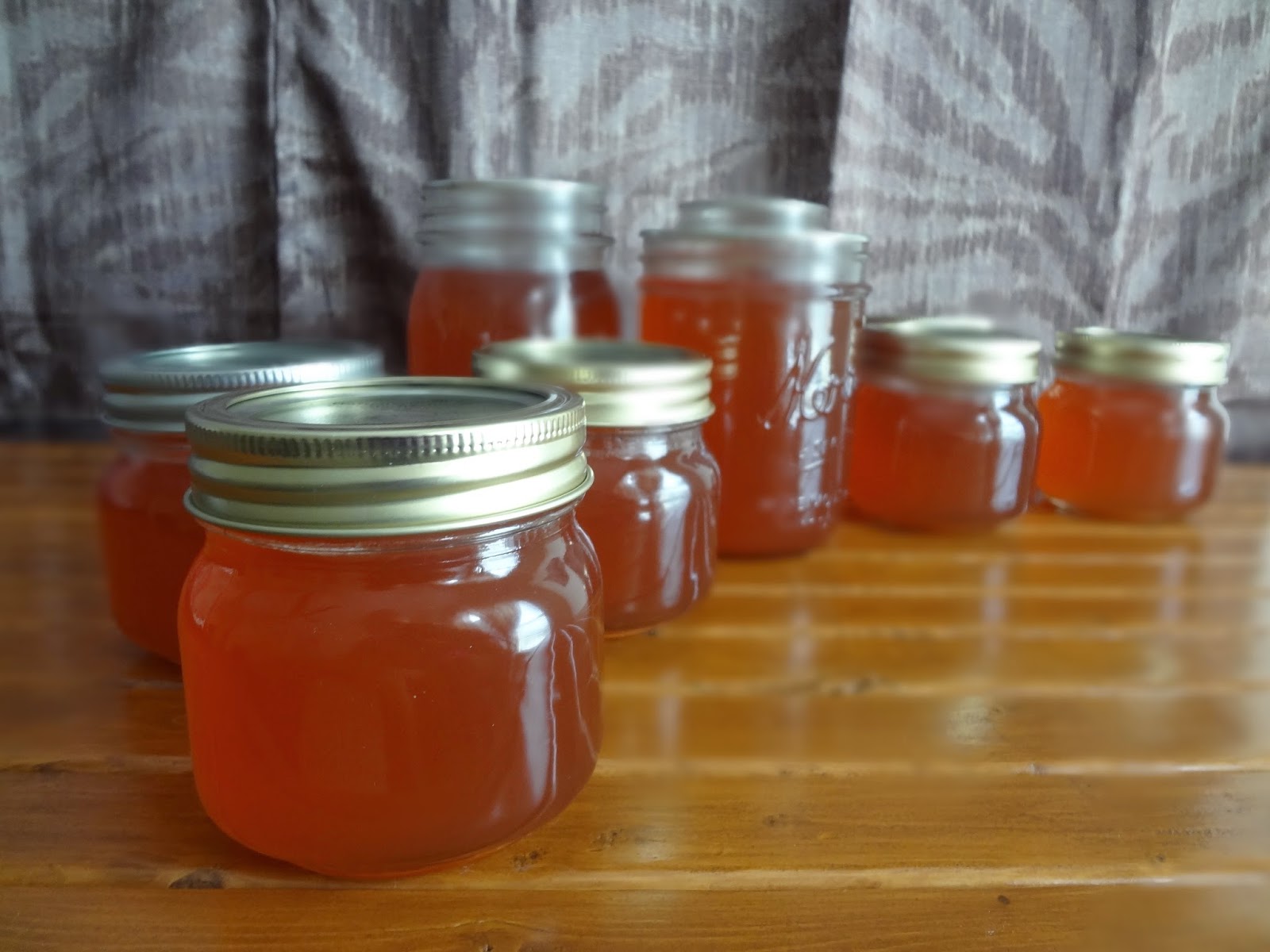 So...to any of my readers out there who are also canners:  What are your favorite apple recipes?  I'd love it if you'd share them (with a linky if possible) in the comments!  Thanks in advance for the great recipes to try!
Labels: Reflections