Recently I had my friend over for an evening of knitting and chatting.  I had made a batch of Dark Chocolate and Caramel Topped Shortbread for the occasion.  This is a recipe I've done before with great results.  I thought these were going to turn out even better, because the caramel had cooked exactly how the directions specified this time and everything was tasting great.  But then this happened (and these are the best of the best): 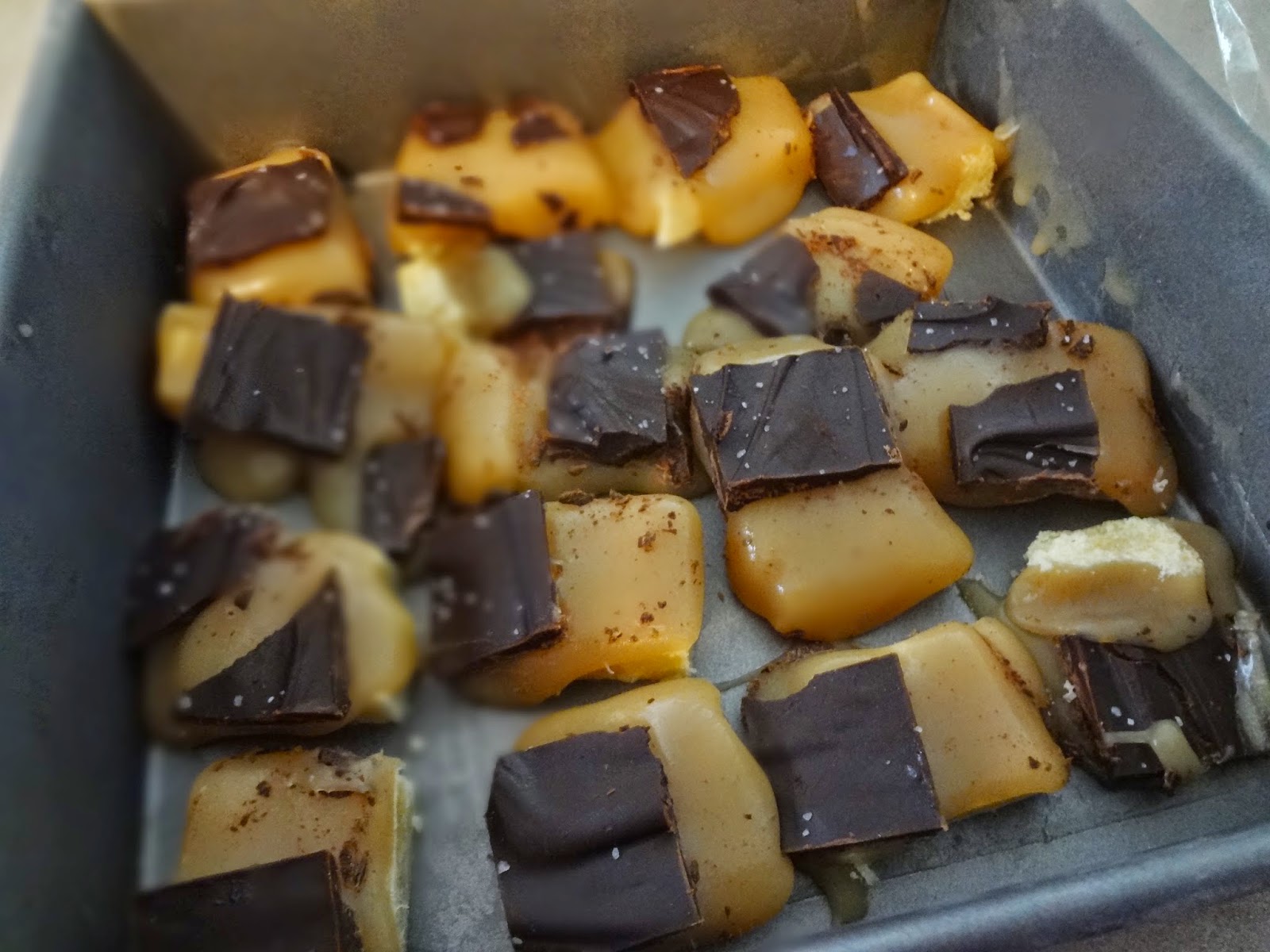 (Go look at the original picture, where the end result is tasty AND pretty)

I offered them to my friend a bit sheepishly, as they were so ugly, but still so so tasty.  And she said, not unkindly, "Well, it's nice to know that not everything you do comes out perfectly."

Which is true.  It's nice to think that everyone makes mistakes a has missteps.  But I think she may have cursed me...because nothing else has come out right since then...

I am very new to canning.  I've read up on water bath canning a bit and I've tried several different recipes and most things have worked out just fine.  But not everything.  A while back I canned some Peach Salsa, which is a fantastically tasty recipe.  But, not understanding canning thoroughly yet, I put some not-hot salsa into steaming hot jars just before processing them and lost an entire quart because the bottom of the jar broke.  Oops...

This week at the store, peaches and nectarines were a great price.  I thought to myself "Oooh!  These would make a great Peach Salsa.  I can rework the recipe to add nectarines and maybe share it on the blog and it will be so tasty!"  Nope.

(Look, I was so hopeful.  Isn't this a great intro shot?) 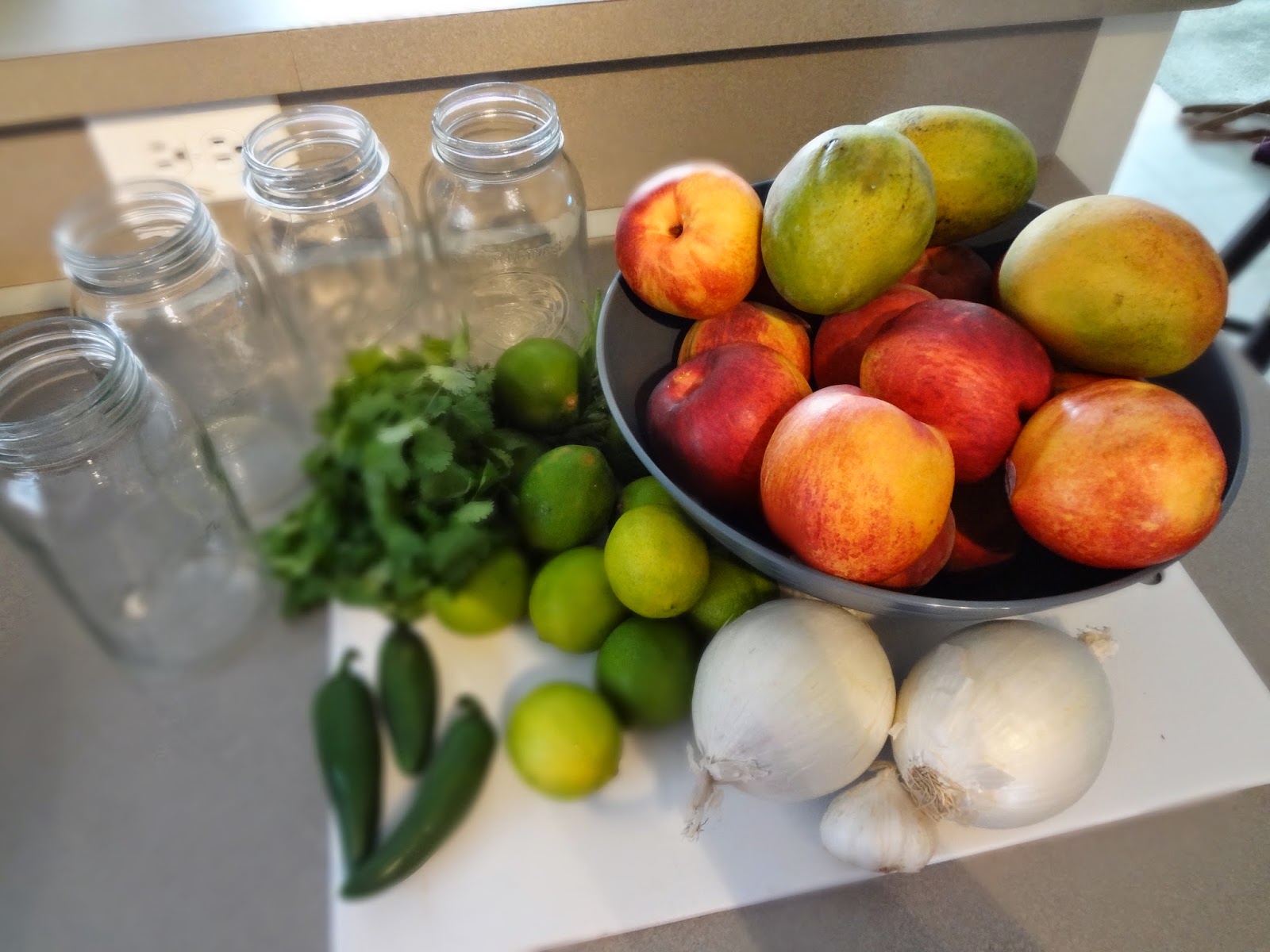 Nothing about this recipe went right.  It started when I blanched the peaches, but their skins still wouldn't come off.  (I tried blanching nectarines too, but I wasn't even sure you could do that with them...it didn't work either, for the record.)  I should have stopped there.  I should have given up and gone on to another project.  But I didn't want to be a quitter.

So I peeled the peaches and nectarines, and decided to add some mangos.  Yum, right?  The mangos had been in the fridge since last week and their skins were...questionable.  But do you know what?  They were the only thing that went right.  After peeling those too they were so tasty and juicy, it gave me hope that this recipe might turn out after all.

From there, I chopped onions (so much crying), peeled garlic (tiny cloves are the worst!), chopped cilantro (can you say wilted?), juiced limes (not so juicy these limes) and diced jalepeños (where were the nitrile gloves!?  My fingers are still burning!).  Give up, give up! I kept telling myself.  Why don't I listen?

So I finally mixed the salsa up, put it in jars that had been washed but were not hot this time and sealed them up.  I was planning to put them in the water bath at room temp, with room temp water and heat the whole business up to boiling together, starting the processing count down when the water boiled.  But they floated.  Because the peaches and nectarines and limes weren't juicy enough to fill the jars with lovely, dense juice.  Sigh.  So I added some vinegar and water to each jar (just to make sure the acidity would be high enough) and let them process 25 minutes after the boil (which is sufficient time to sterilize the jars and contents).  When I pulled them out their lids popped, so at least they sealed.  But who knows how the contents will taste?

So, since I'm not offering any useful content, can I point you in the direction of a very helpful pin that I have learned a lot from today?  Avoiding Common Canning Mistakes--by Jackie Clay-Atkinson.  I should have read this first.  But now I know.


I think I'll take a little break from canning.  And maybe I'll buy a canning book.  An actual book that has been published and not a recipe from Pinterest (who vets these things, really?)  This one looks nice: Canning for a New Generation.

I wish you better luck in your endeavors than I've had in mine :)  Have a great week.
Labels: Reflections