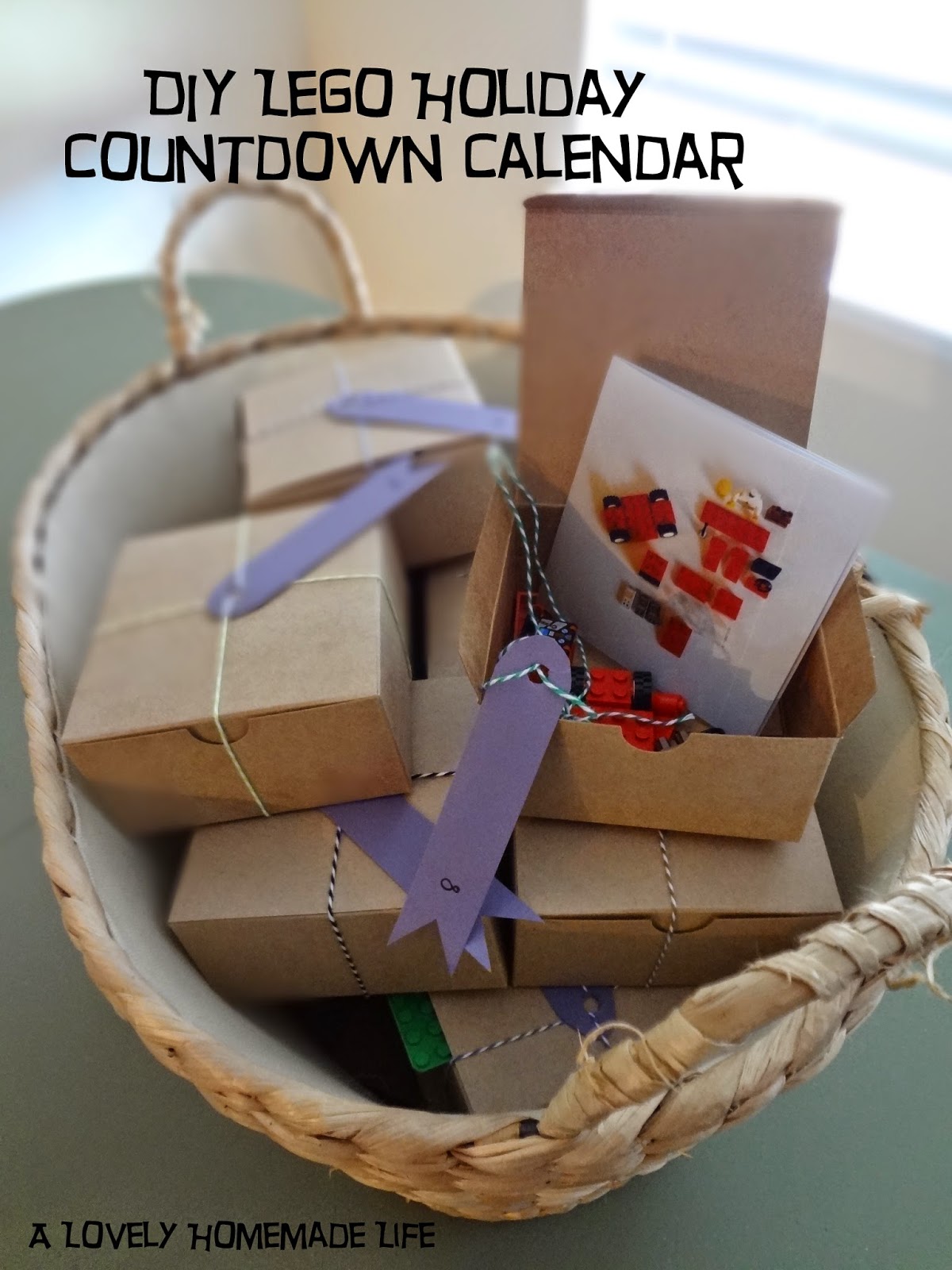 Several weeks ago Michael and I went to the Lego store to get some gift ideas for Luca.  When I saw that they had Advent Calendars out already, I was really excited and ready to buy one, until I started inspecting them a bit closer.  Even though it provides one small Lego build per day, it just didn't seem that exciting to me.

We are a family that has what I like to call "legacy Legos".  Michael's parents have multiple large tubs of Legos they saved all these years and they have already given us some for Luca.  Not to mention all the new Legos this child has received.  Many people in our area have turned their dining rooms into home school rooms, but not us...ours is now a Lego Room.  You may think I'm exaggerating...but I have photographic evidence ;)  But they are totally his favorite thing and I knew he would think it was a really exciting way to count down to Solstice.  (We're doing our immediate family celebration for Solstice this year...I'll have to explain more about that in a future post)

So I made my own countdown :)

Using our nearly unlimited supply of "legacy Legos" Michael and I spent an entire evening putting together mini-builds for each day from December 1 to December 20.  We had entirely too much fun with this part and it was enjoyable to just be creative.  Here are some of our "vignettes" as I like to call them: 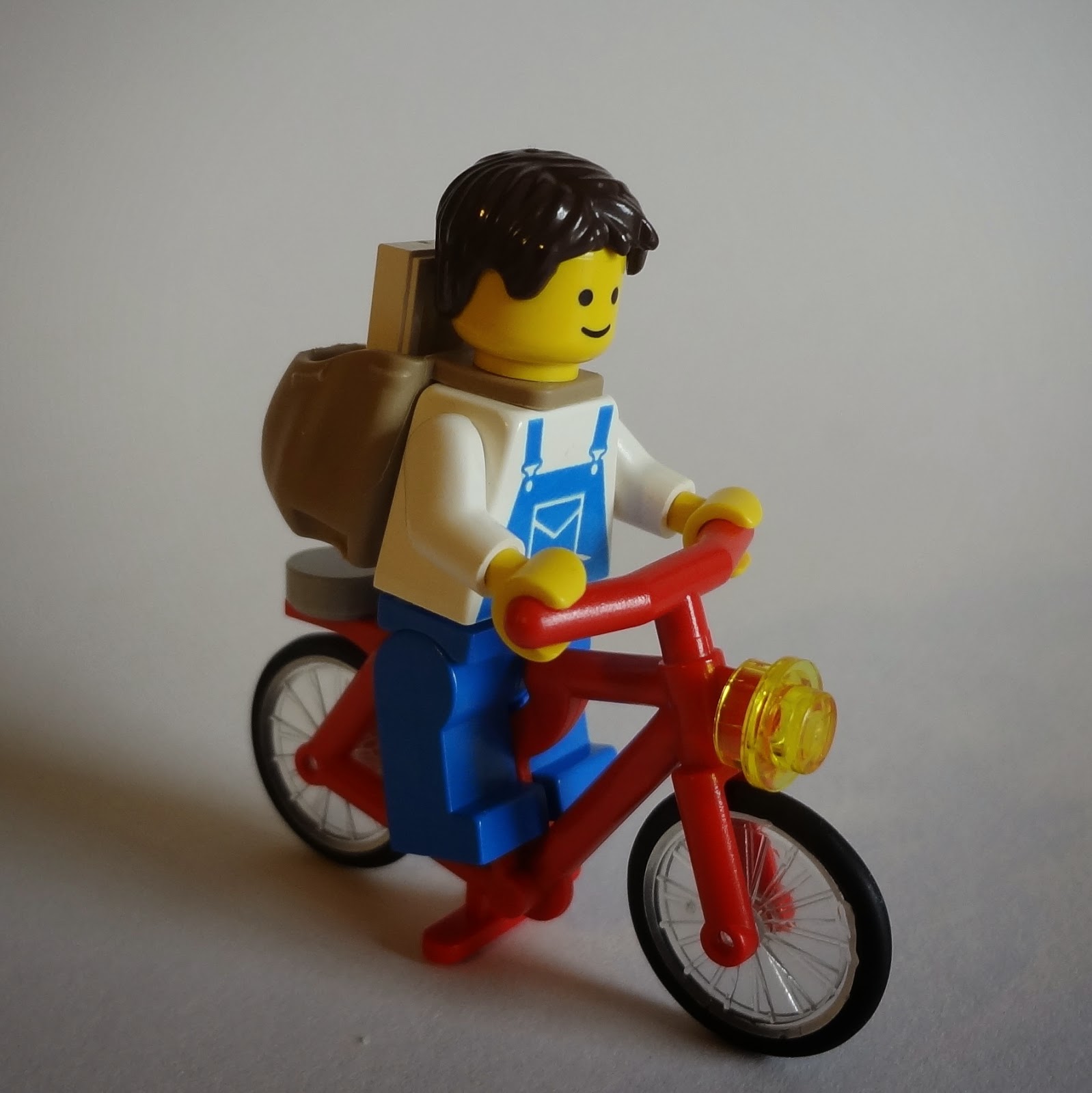 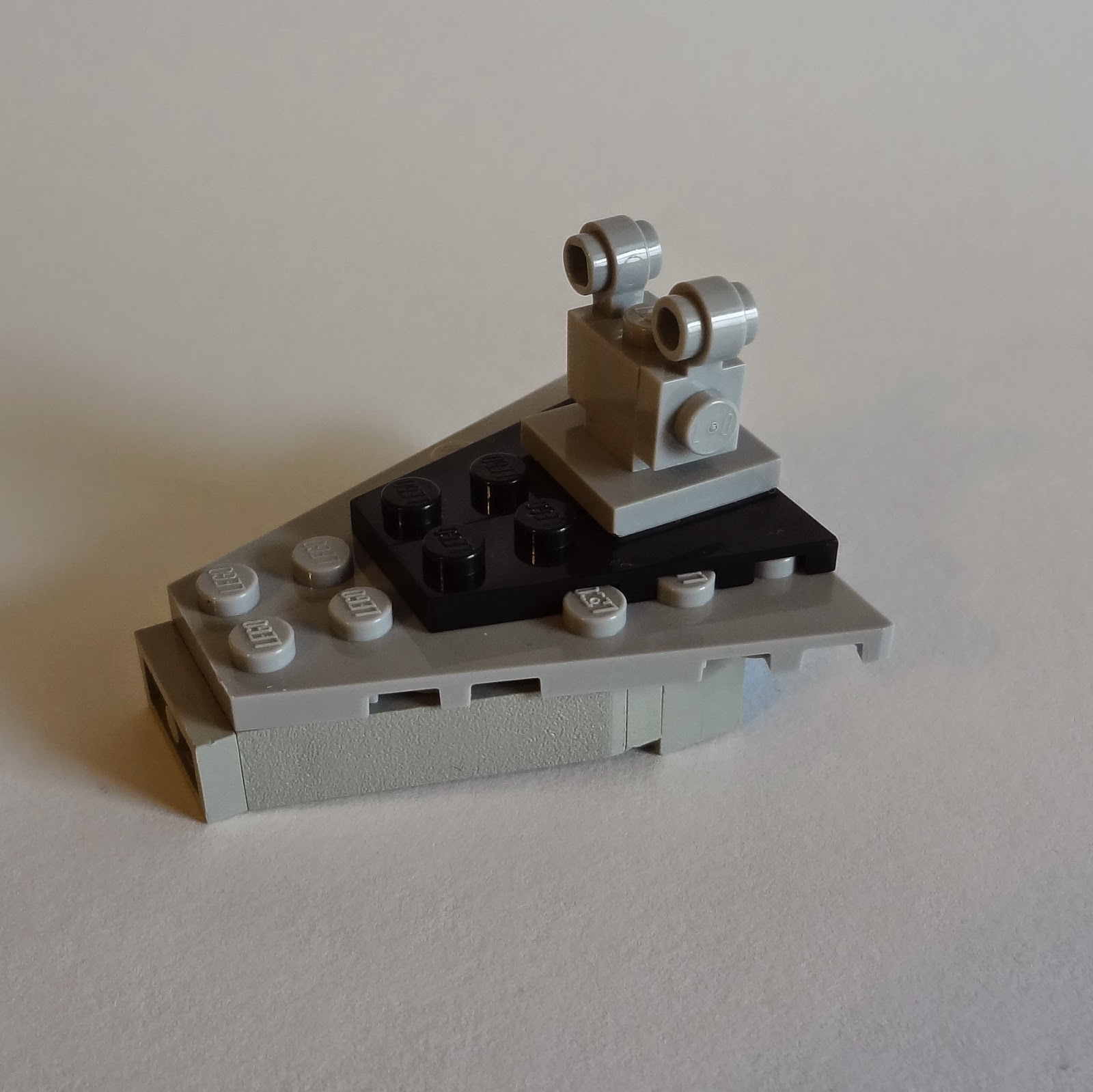 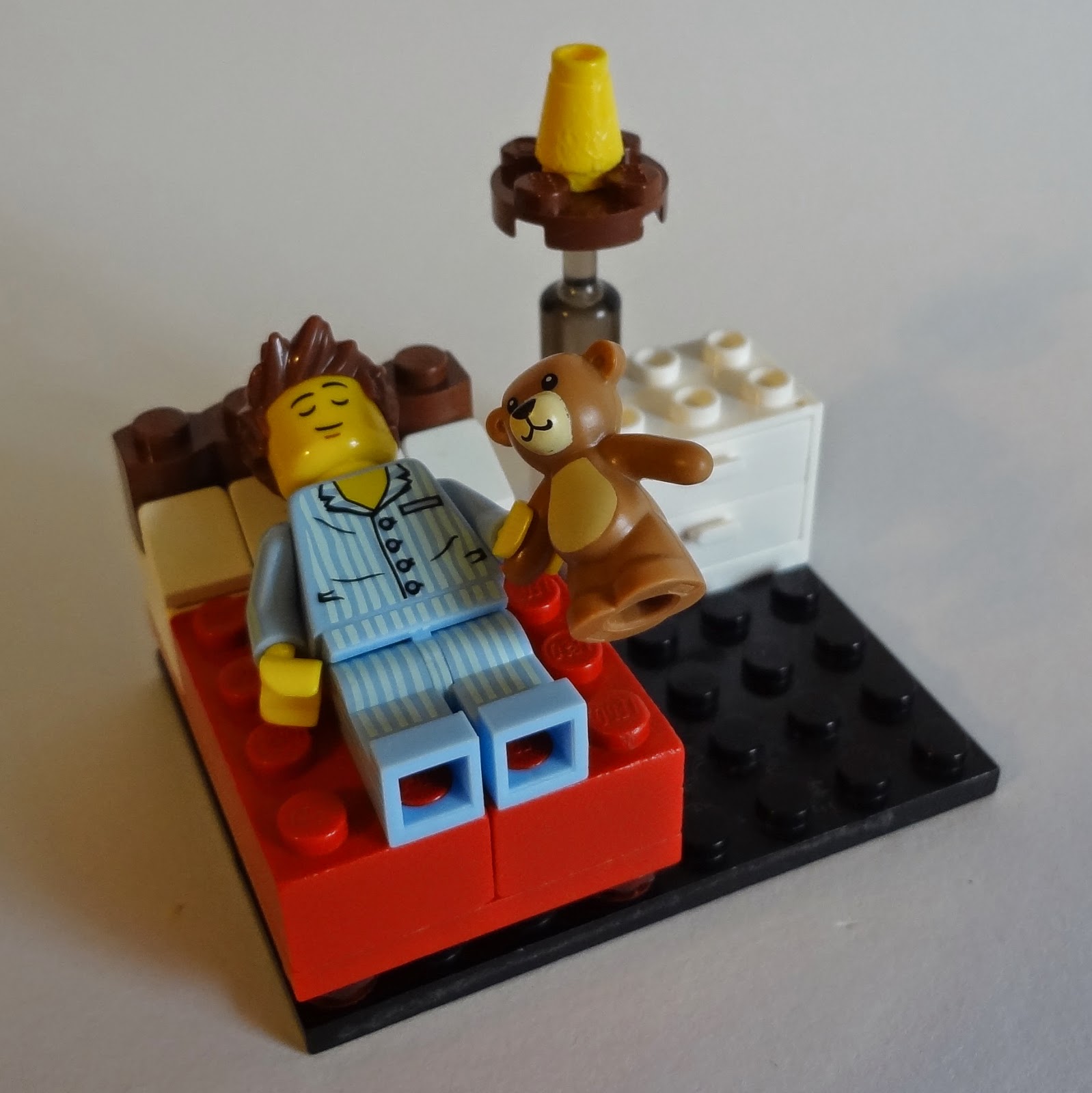 So once we had them together it was time to get crafty.  Some are pretty self explanatory and could be put together from a single picture, but others are more involved.  So I worked backwards, photographing along the way as I took the more complicated ones apart and then had the pictures sent off for printing.  The ghost treasure scene was fairly straightforward: 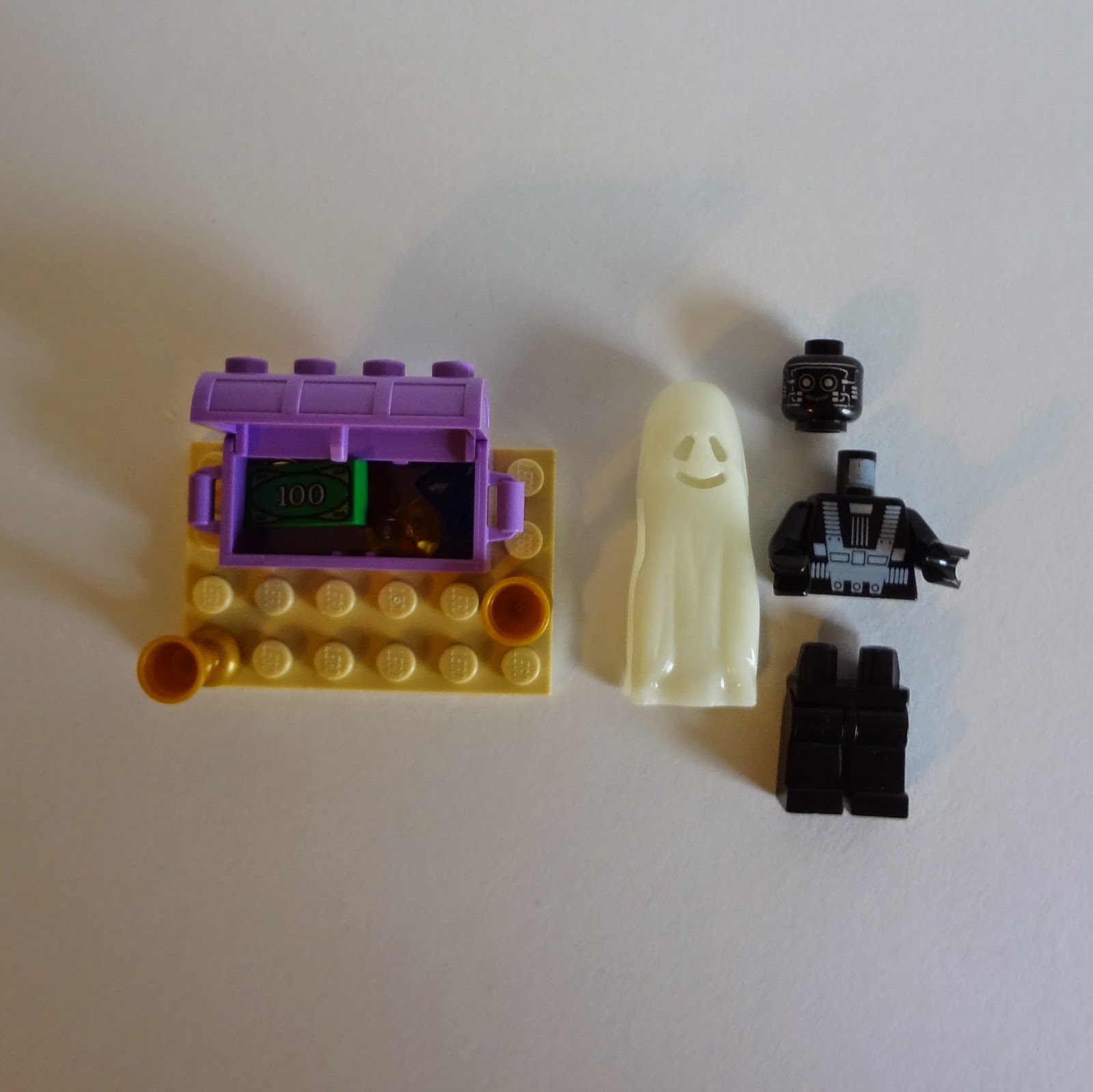 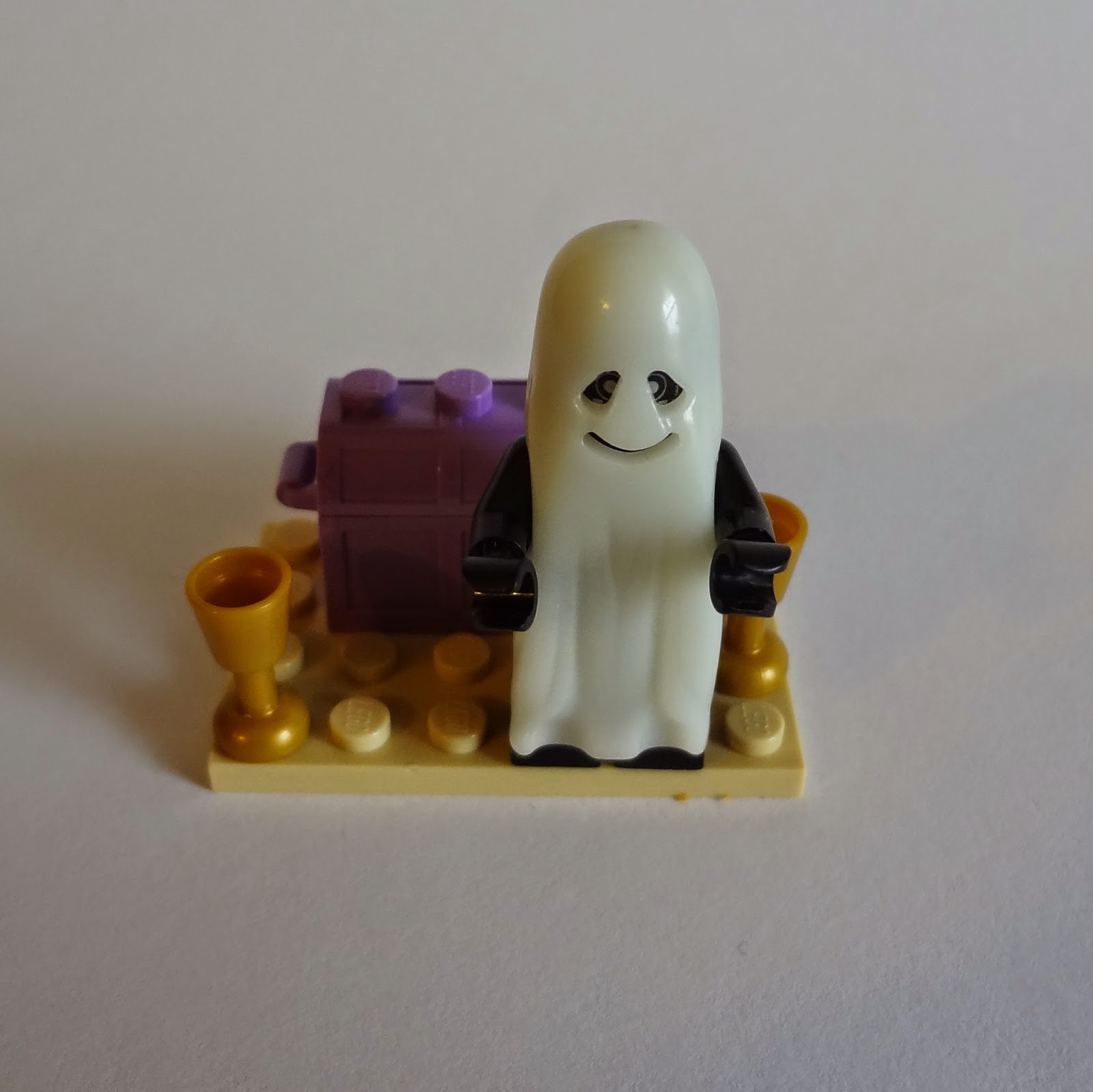 The missile test launch site was a bit more complicated: 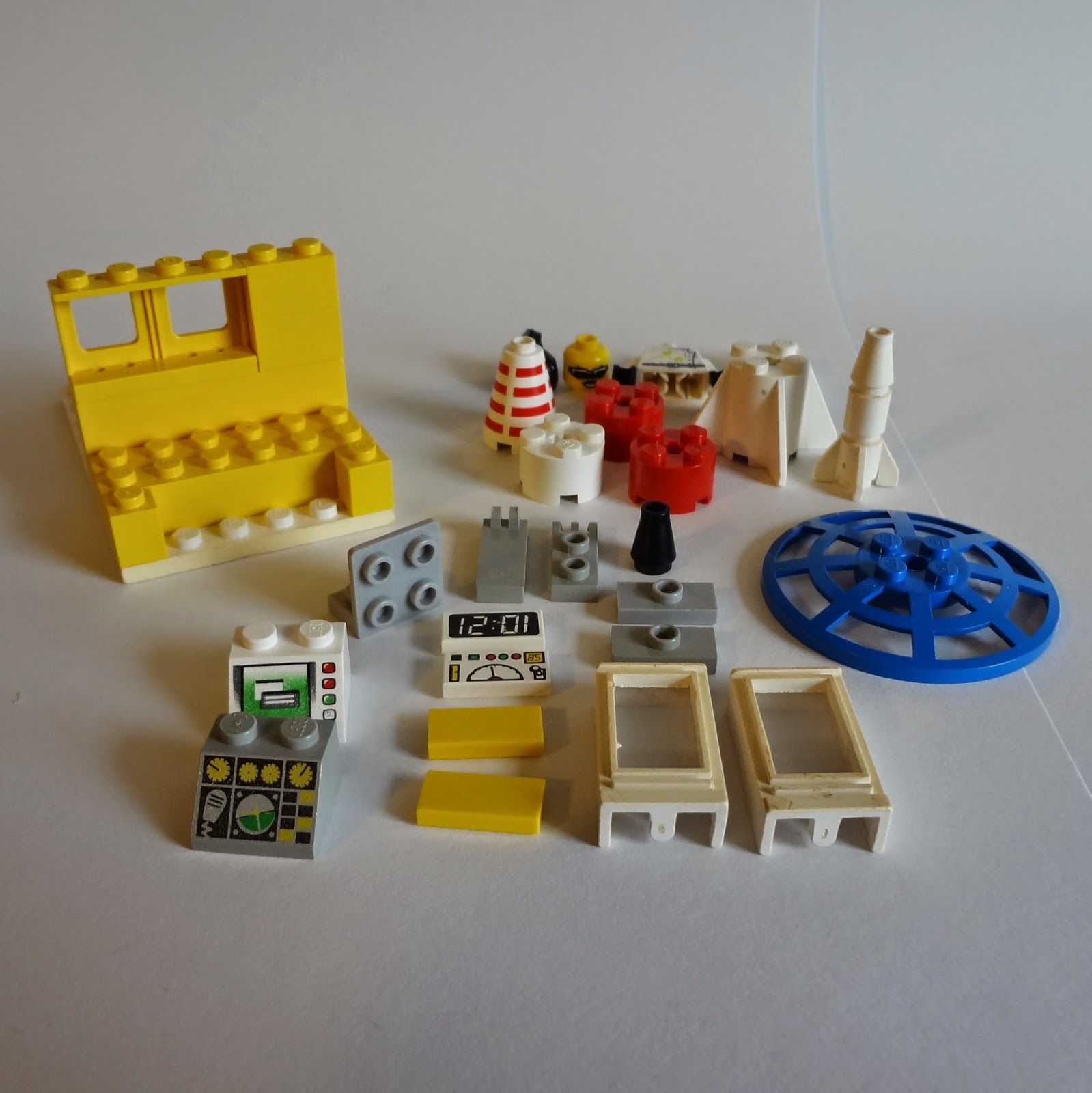 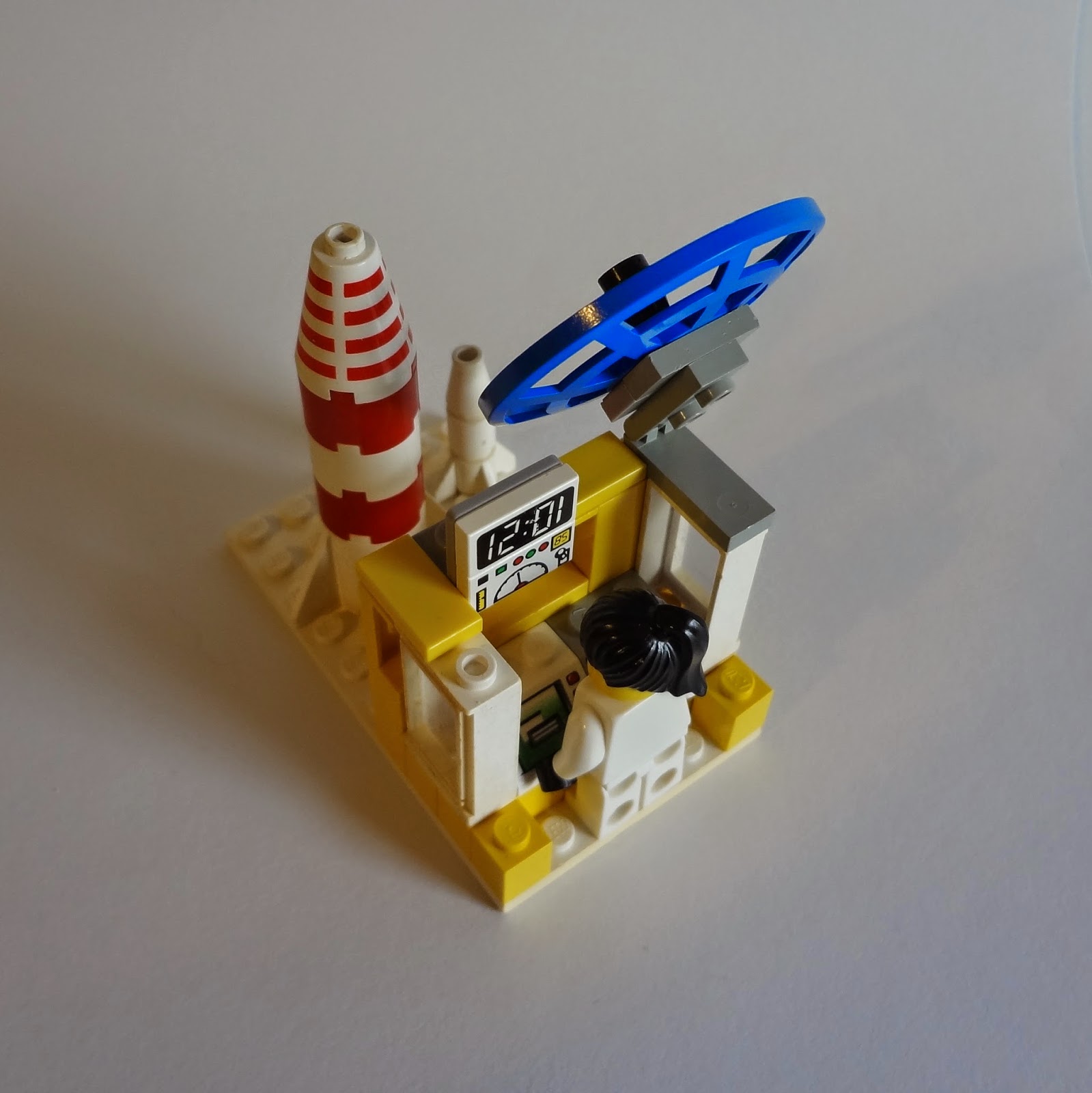 Once I had the pictures back, I cut them to 4"x4" squares and assembled the "instruction booklets" for the more involved vignettes.

Each collection of pieces went into a 4"x4"x2" craft box (that I ordered from this Etsy shop) with its instructions and we decided on the order.  Some are smaller and not terribly exciting, so we put those first ;) 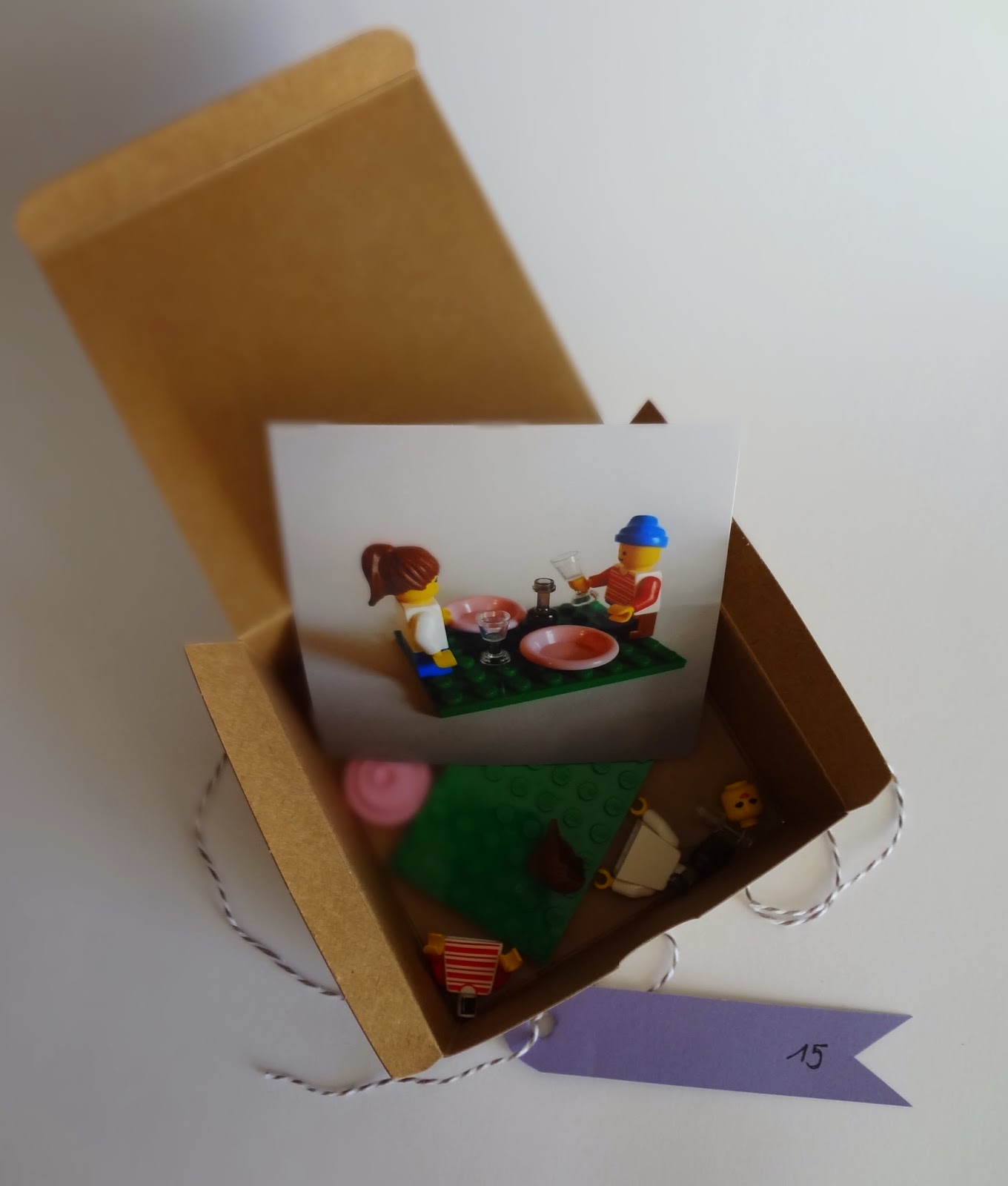 I wanted to be able to display this Countdown Calendar in our home, so I had this really neat idea to stack the boxes, with #20 at the top and #1 at the bottom.  I thought I'd use this baker's twine to tie each box with a bow, starting at the top, positioning the bow under the box.  The next one down would have its twine looped through the one above it to create a hanging garland.  Each day Luca would be able to untie the lowest bow to get the box for that day.

That didn't really work though...the boxes wouldn't stay lined up and I was pretty sure the first time he went to take a box off the whole thing would come apart...not to mention there isn't a place we could display it that would be out of reach of our 11 month old who is already walking and getting into everything.

So I compromised and tied the boxes with their numbers using the baker's twine, and arranged them in a basket.  In future years I'm going to have to figure out this hanging garland idea, because I'm pretty sure this is going to become a tradition. 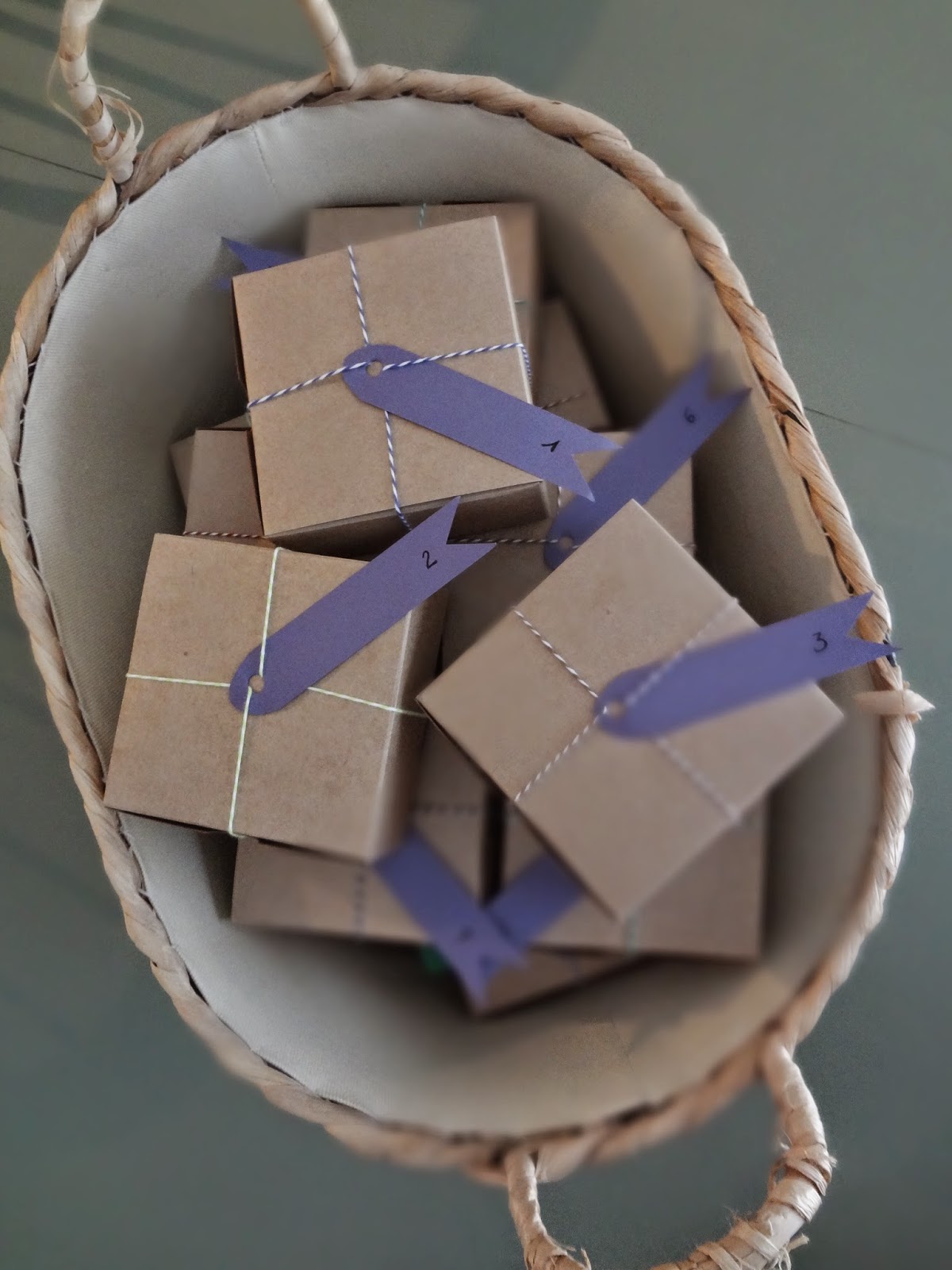 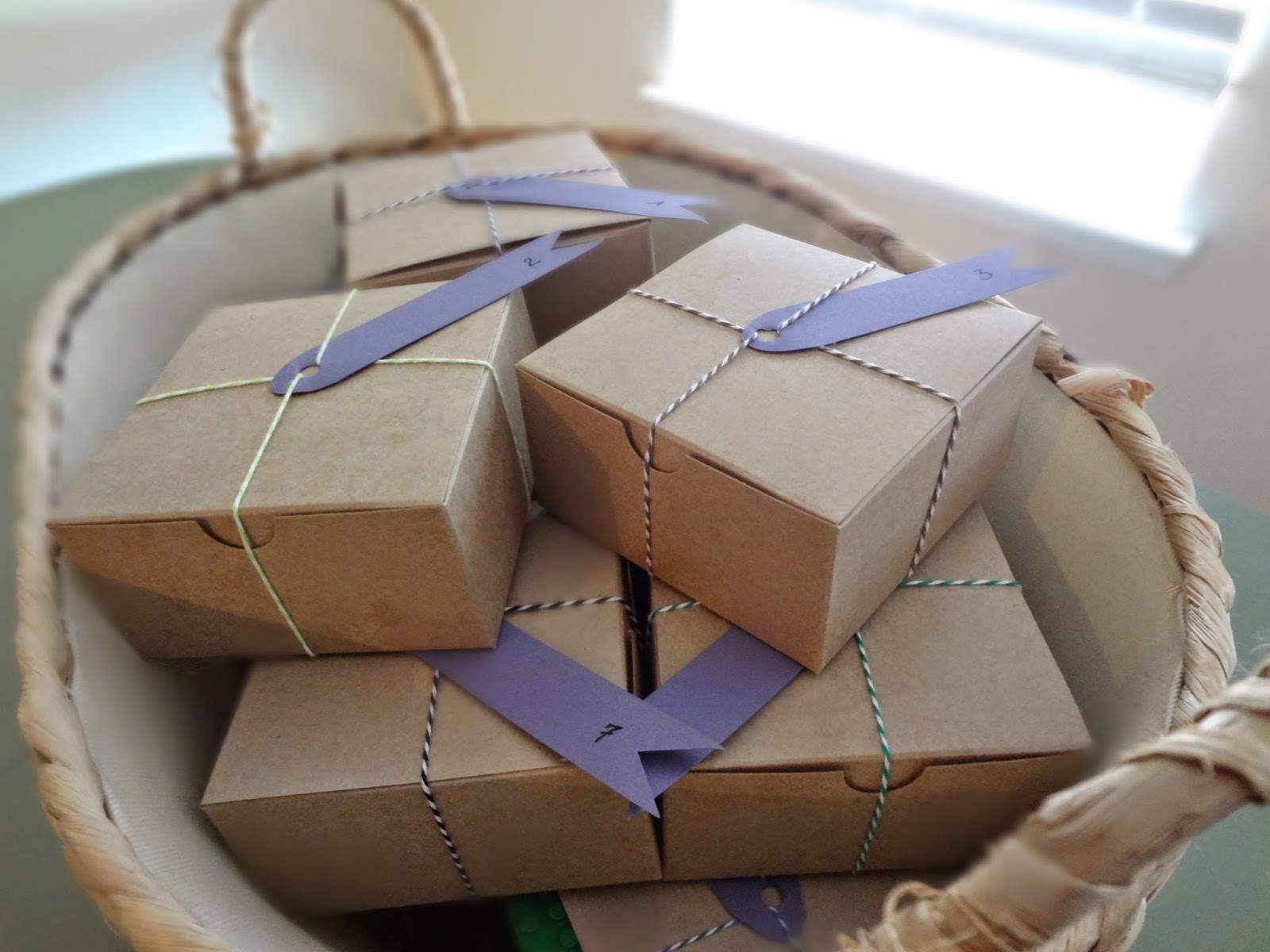 I'm really looking forward to December 1 to show him our fun count down and to help him learn to exercise more patience ;)

This is our first year doing a Countdown Calendar--what types of count downs do you do for the holidays?