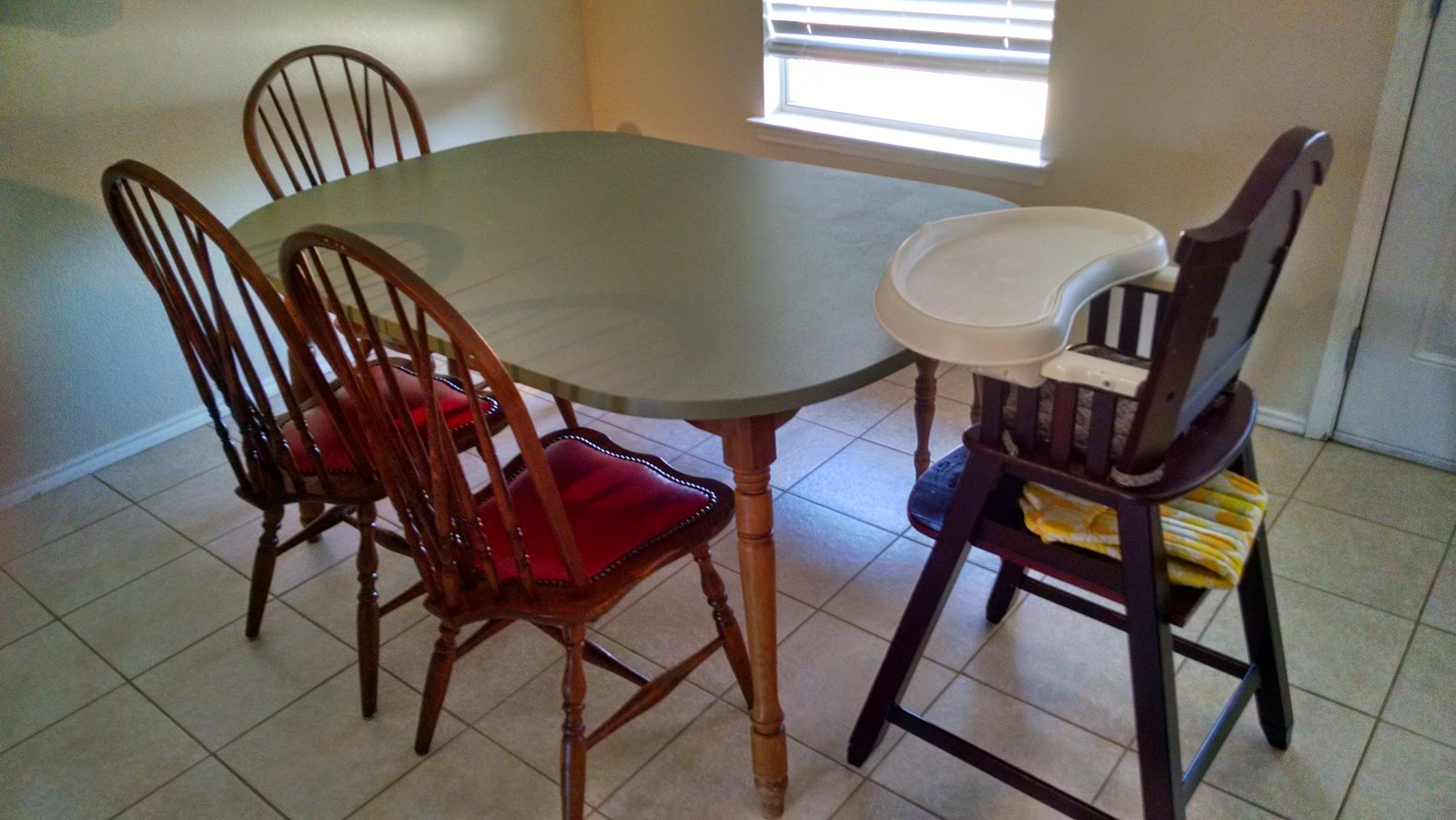 So 2 weeks ago I revealed my new, refurbished antique kitchen chairs, with the promise of a post devoted to the kitchen table.  Well...today's the day!

If you'll remember, my lovely neighbor Haleigh offered me an old work table that she was getting rid of (thanks Haleigh!).  It had solid wood turned legs, but a veneered particle board table top.  I had a hunch that the legs could be something special if the paint splatters were stripped off and the finish was renewed where it had been scuffed, so I used the same materials on it as the chairs.

We started off with a healthy coat of Citri-Strip.  I chose this particular product because of the low odor, even though some reviews said it did not remove as thoroughly as expected.  I didn't need to take off much, just a layer of gunk and splatters, and it did the job well.  I applied it with a paint brush and left it on for about an hour and then began wiping it off.  I'll admit...I went through a lot of paper towels, but I felt they were doing a better job than a rag.  Once I got all the gunk off, there was still some residue, so a good wipe-down with Mineral Spirits did the trick to get a nice even finish to work with.

I then rubbed the same Howard's Restor-A-Finish onto the legs and it really brought out the beautiful color while filling in the scuffs.  Seriously amazing stuff.  I finished it off with the Howard's Feed-n-Wax to shine it up and protect the wood.

So the lower part of the table was done, and had gone according to plan.  It was time to start the top.  I wanted to try chalk paint, and had intended to go buy some Annie Sloan...but I chickened out at the last minute.  What if I didn't like it?  What if I messed up the wax?  I just couldn't swallow the price.  So I took the last half of the can of Valspar The Color of Money that I had used on the Photography Backdrop Cabinet, and mixed it up into some DIY chalk paint with 5 T plaster of Paris and 2 T water.  (Tip:  sift your plaster of Paris through a fine screen to get out any clumpy bits and mix it with the water before adding it to the paint.  Also...*flat paint*...not satin...notes for next time) 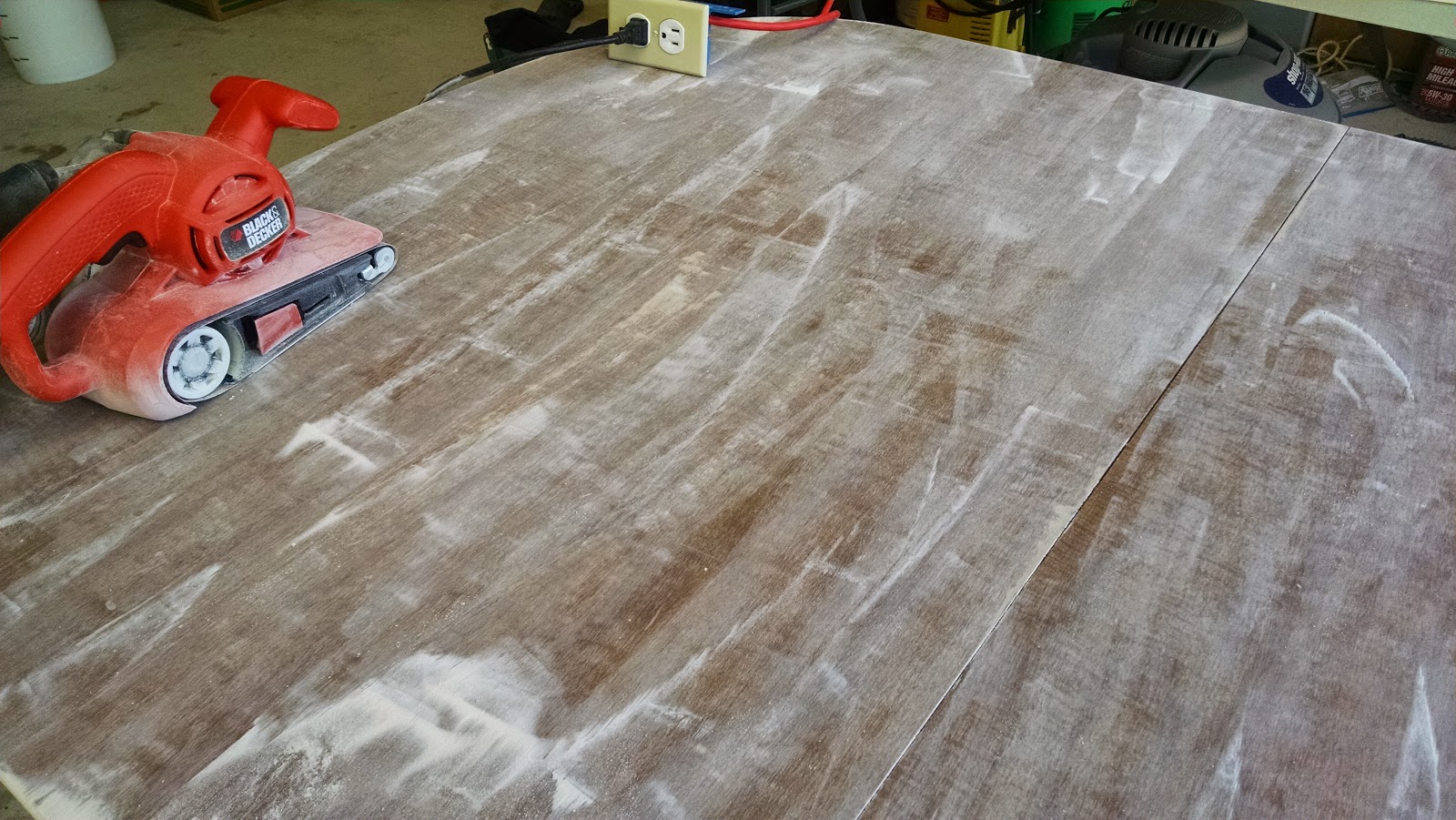 I started off by aggressively sanding the veneered top.  I sanded and sanded with a medium grit sand paper and the power sander until the surface was no longer shiny.  I wiped it down to remove the dust, then I put two coats of the "chalk paint" on it.  This is where I got annoyed with the pieces of grit that were ruining the nice finish.  I'd be going along just fine, then a whole bunch of tiny flecks would mar up the surface.  Frustration.  Annie Sloan next time...maybe... 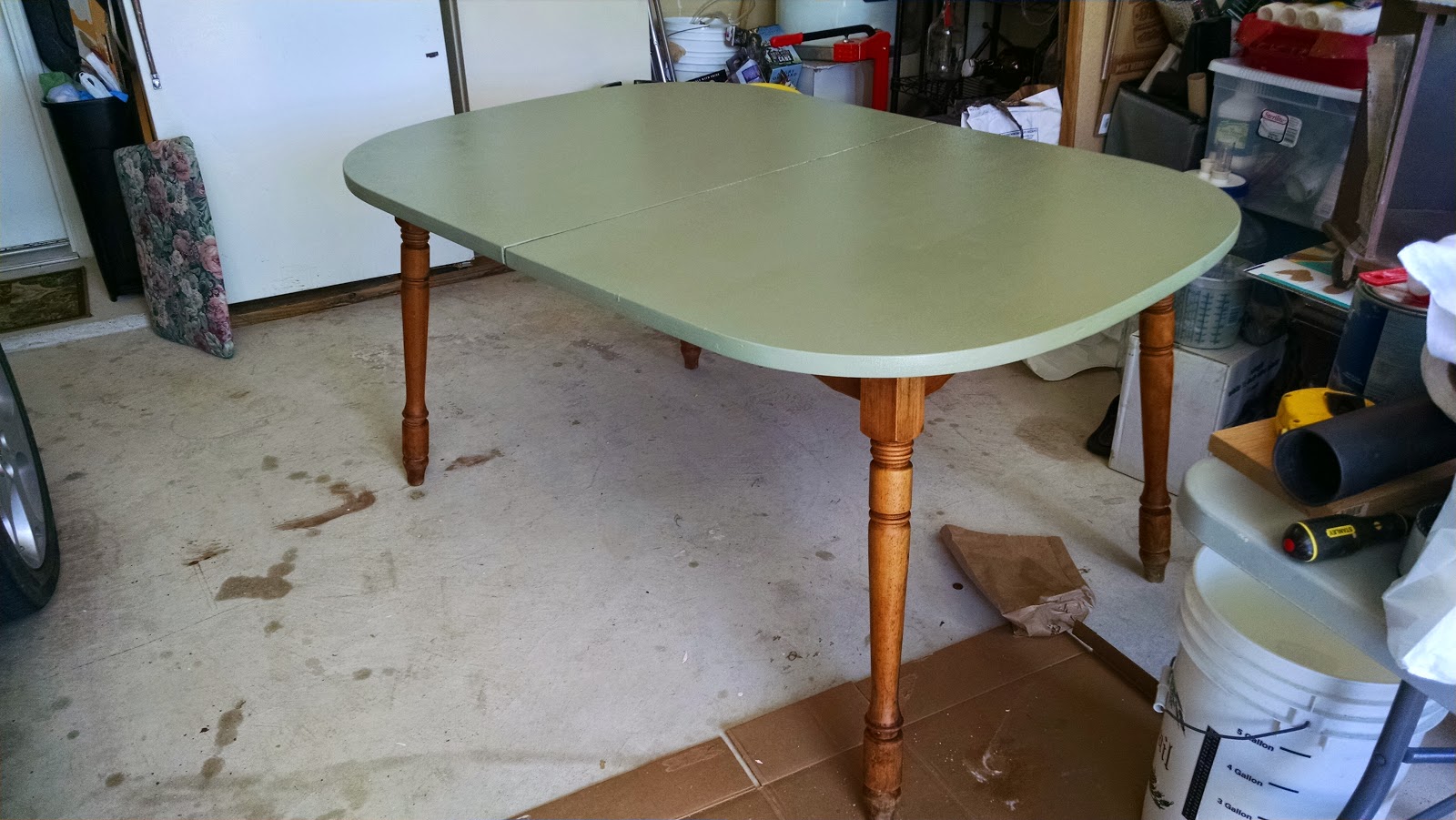 I allowed the paint to dry for several days, then moved on to the waxing step.  This step is crucial for chalk painted items to turn out looking nice (so I read on Pinterest).  Again I went with not-Annie Sloan wax...instead opting for Minwax Paste Finishing Wax and a 1-1/2" Wooster stencil brush.  Wax--amazing!  Brush--frustrating!  It laid the wax on very nicely, but it left behind all sorts of hairs that I had to pick off of the finish.  Sigh.  So I had a system down.  Wax one quarter of the table, pull the hairs off, wipe the excess, repeat.  Wait 24 hours, buff with a soft cloth.  Repeat from the beginning.

I ended up doing 3 coats of wax, and I'm happy with the finish.  It's a little grittier than I would like, but at some point in the future, I may go back and give it a light sanding and do one additional coat of chalk paint (flat paint, with a finer mix of additives) and re-wax.  I also bought a goat hair buffing brush for my next chalk painting project:  Isla's big girl bedroom furniture!

I'm already collecting the pieces I want to refinish and add to her room...she's not quite ready for them yet, but that buys me some time...Here's a sneak peek! 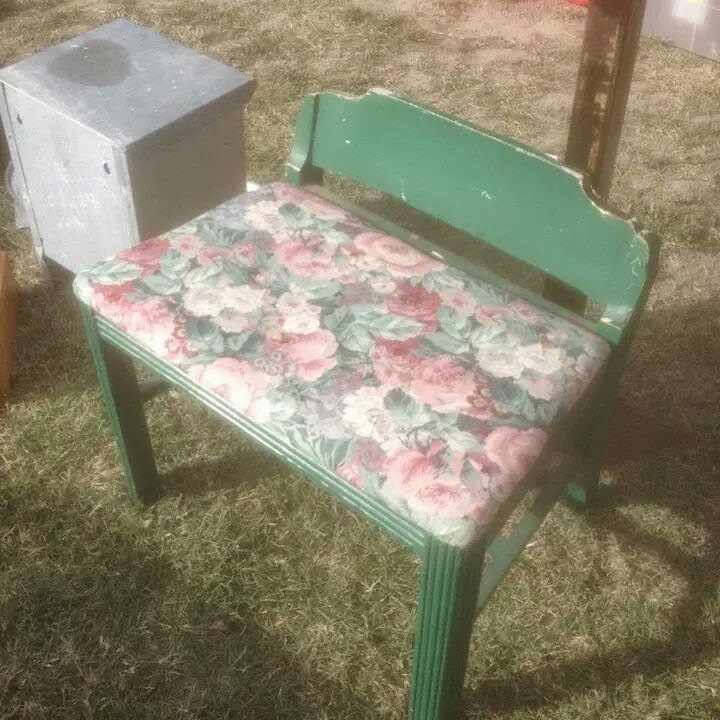