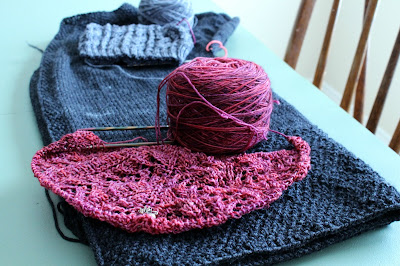 And none of them are ready to release...

I've got three designs in the works right now at various stages of completion.  The XOXO Soaker pattern is going live in 2 more weeks, but I've got quite a bit of editing left to do in preparation.  My tech editor got back to me Sunday with suggestions and I just haven't had time to sit down to do them--but I'm super impressed with her work and kicking myself for not hiring a tech editor sooner.  I feel so much calmer now knowing that I have another set of eyes looking everything over in advance of release.  Thank you Liz!

Perdrix is also coming along, but I'm still waiting to hear back about joining the IDP program through Knit Picks.  It's been much longer than their stated decision timeline and I'm getting antsy to get this one out there.  I've been working on it since November and it's such a cute pattern!  I guess it's time to send that one along for tech edits so it will be ready when I am informed of the decision.

And...last but not least...Lady Wren is coming soon!  I've had so many people interested in an adult version of Baby Wren, and I'm happy to announce that the pattern will be ready shortly!  Stay tuned for more info and details to sign up to test knit!

And, just in case you were worried that I didn't have enough projects going on at once, I'm still working on Alexandra in between other things.  So beautiful...I can't wait to wear it!

I'm happy to say I've been spending more time at the gym lately, so Outlander is coming along as well.  I know, I know...you're probably tired of me linking to it...me too!  But such a nice distraction from the elliptical machine, right?  Linking up with Ginny this week!
Labels: Yarn Along