How Can He Be 5 Already? 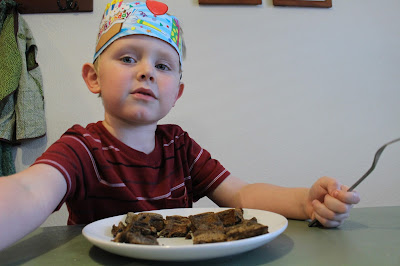 How is it even possible that this boy is 5 today?  It seems like only yesterday that they were admitting me to the hospital for an induction for IUGR at 37 weeks 5 days.  The pitocin was administered agonizingly slowly, and the induction that began at 11am on a Monday dragged on through the night until 7am Tuesday rolled around and the doctors were suggesting a C-section.  Just a little longer...he's not in distress...just let me try a little longer.  And sure enough, in his own sweet time, he was born in to the world at 10:45am, just shy of a full 24 hours, weighing 6 lbs 3 oz and measuring 18.5 inches long.  He was so tiny, so fragile.  We had our share of early struggles--insufficient milk supply, jaundice, slow weight gain, but eventually we figured each other out and he took off.

Sleeping through the night consistently starting at 14 weeks was certainly a big highlight as he met his milestones and continued to thrive.  Identifying and naming letters (correctly!) at 18 months was another big one, but the talking was slower to come.  I'll never forget ah-puh-tuh (octopus) or kuh-puz (because), but they've gone by the wayside now, replaced by proper English and mostly appropriate human syntax ;)

Always a bundle of energy, Luca enjoys being outdoors and his recent foray into gymnastics, but his true passion is building, inventing and creating, mostly with Legos.  This child was putting Legos for 6+ years olds together at only 3, and now, no set is too hard for him.  He also enjoys watching Lego building tutorials on YouTube and recreating the designs--his most recent accomplishment was a giant Kit Kat dispenser.

Luca--you are an amazing, intelligent, sweet, stubborn and sensitive boy and we love you all the loves!  We're so thankful to be your parents and to be on this journey of life together with you.  Happiest of 5th Birthdays!
Labels: Reflections