Happy Monday everyone! I'm so excited to announce that I'm launching my newest pattern tomorrow! It's only been a few weeks since my last release of Lady Wren and Wren Collection and I couldn't be more pleased with how it was received! It is by far my most successful pattern and I'm hoping to keep the momentum going with tomorrow's release--Scarlet Ibis. 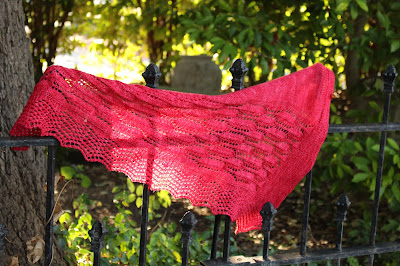 Step 1: Lightbulb!
It begins with my Moleskine quad ruled notebook.  When an idea strikes for a new knit design, I immediately grab my book and a pencil and begin sketching.  I'm not much of an artist, but it's important that I get the basic idea drawn out before I move on to other tasks and forget.  I'll do a quick sketch of front and back, make a few notes about the interesting design features and who the design is for.  If a name readily presents itself, I'll write that down too.  I also periodically pull out my stash totes and look through my designs assigning prototype yarns.  My (ever-growing) stash is mostly work-horse yarns in a variety of weights that I picked up at a good discount here and there.  Many of them have "assignments" already, but some are waiting for the right design to come along.

Step 2: Ruminate!
Once the design is drawn, I rarely start in on it right away.  I've usually got 3-5 designs in various stages of completion running around the house at any given time, so new ideas often have to "wait their turn".  The rumination phase is also when I think on how to technically accomplish the shape of the piece.  Major bugs have to be worked out now before the needles come out, so designs stay here until I've got a good handle on how the finished piece will come together.

Step 3:  Yarn choice and swatching!
Notes have been made, project queue has been cleared, now it's time to get down to work on a new pattern.  I often write up some preliminary instructions before choosing the yarn and swatching.  I know many knitters hate to swatch, and we all know swatches can lie, but it gives the important foundation for the maths, especially for a garment done in several sizes, so I'll swatch over and over again until I'm happy with the drape and the size.

Optional Step:  Submit for publication!
I have submitted a couple of designs for a book project (one of which was accepted--yay!) and several more for the Independent Designer Partnership with Knit Picks (four of those have been accepted--hooray!).  I want to start submitting more ideas for publication, but I usually like to have completed a workable prototype before submitting, which is limiting because of quick deadlines.  As I'm still new to designing, I don't want to be in a position where I've submitted a killer idea for a book, but then find myself unable to get the sizing or the details to work out in time. The design (mitts) that was accepted for the book is still in process and I've knit it 15 times (I'm not exaggerating...I'm a total perfectionist) trying to get it just right.  The first draft was fine, but #15 is a winner.  I am fortunate that the deadlines for this book have been generous and I have had plenty of time to work and rework my design.

Step 4: Prototype!
I always knit a prototype, usually out of something boring and/or cheap and/or a weird color.  For example, the prototype for Lady Wren was knit in Louisa Harding Colline in Squash that I picked up on clearance at Tuesday Morning.  It wasn't bad, but I knew it wasn't what I wanted to official sample to be made of.  Lady Wren is a pattern that I partnered with Knit Picks to complete and they provided their Comfy Worsted yarn in Marlin for the official sample, which I think is much better.  It was nice though to be able to frog different parts of the prototype to reknit them without worrying about stressing the yarn. By the time I got to the official sample, no frogging was required.

Step 5: Write it up!
In this step, I use the style sheet that I've developed with the help of my tech editor to lay out the pattern in Word.  I use EnvisioKnit charting software to help with any charts that are needed, and have Michael draw up schematics In Pro/E when it's appropriate for the design.  I'm always torn between leaving no detail un-noted and trying to be concise to save pages.  It's a tough call most times, but I tend to lean towards giving more info than necessary.  I always want newer knitters to be able to make my patterns if they're determined, so I tend to give more helps that expert knitters may find superfluous.  Sorry expert knitters!  I want to give everyone a chance to be successful and attain their 'expert' status too!  I also re-knit the design at least one additional time (sometimes a lot more!) after the pattern is drafted to start catching errors.

Step 6: Call the testers!
Test knitters are an important part of a new pattern's success.  I like having several knitters working on each new project who can give me feedback about the ease with which they were able to complete the pattern.  Tests are run in my Ravelry group A Lovely Homemade Life (hint hint--head on over there to volunteer if you're interested!) Testers are asked to check in regularly while the test is running, complete a project page on Ravelry with great pictures of their finished work, and link it up to the new pattern once it's released.  This gives potential buyers a chance to see that others were able to get the same results and they often get valuable tips from a tester's notes.

Step 7: Bring in the big guns!
Once the testers are part way through their work and have brought up any major, glaring errors, I send the refined pattern off to my Tech Editor Extraordinaire--Liz!  Some designers prefer to involved their tech editor sooner in the process, but I like having most of the bugs worked out before she sees it.  That way she has the ability to catch all the nitty-gritty errors without having to bother with obvious problems (most of the time!)  She sends back her notes and I sit down with them and the pattern side by side to make changes (yay for dual computer monitors!)  After edits are back, I'll inform the testers of anything big, and then I'll let it sit for a while.  This may be the point where I complete the official sample of the design if I haven't finished it already.

Step 8: Pretend to be a photographer!
My favorite model is my BFF's daughter and our favorite babysitter.  I usually give her a few days notice that I'm ready to take pics and ask if she's up for it.  So far I've only given basic guidelines for wardrobe choice--she does a great job of choosing neutral clothes that work well with the knits.  And she's gorgeous of course!  We've gone to a park nearby for pics and I'm working on finding the natural light that isn't speckly and photographing her and the knit to their best advantage.  I work with a Canon T5i DSLR camera and usually have the most luck with the Aperture Priority setting.  In the future, I hope to go full Manual :)  I do very minimal editing after the shoot, usually just cropping the pictures slightly.

Step 9: All the computer things!
Once the pics are done, I can start pulling things together online in preparation for release.  I make my personal project pages on Ravelry.  I write up the draft listing for the pattern.  I finalize the PDF.  I schedule blog posts.  I prepare the MailChimp launch newsletter.  I email the pics to myself so I can save them on my phone and share them on IG.  This time around, I've taken out some Ravelry ad space (look in your notebook section--I hope you catch it sometime in September)!  It feels like a never-ending computer updating session in the days leading up to the launch, and I usually end up making myself a check list to help me remember all the different links that need updating immediately after the pattern goes live.

Step 10: Brew the coffee and hope for the best!
On launch day, I get up early (5am!) to officially publish the pattern to Ravelry.  I update the newsletters with the link and send those out.  I update the blog post with the link and publish.  I sit around and sip my coffee and babysit the computer for the first several hours--making a post on Facebook, adding an announcement to a group on Ravelry, posting a pic and link to IG, and cycling back through.  Every click counts on launch day, because my goal is always to at least make the front page of Rav's "Hot Right Now" list.  Depending on other pattern releases that day, I hope to get into the Top 5, but some days that's tougher than others.  If a new pattern achieves Top 5 status, that's a momentum all its own, putting the new design's thumbnail in front of many, many more Ravelers.  It's nerve-wracking, but terribly exciting at the same time.  So that's a run-down of my design process from start to finish.  I hope you found it interesting!