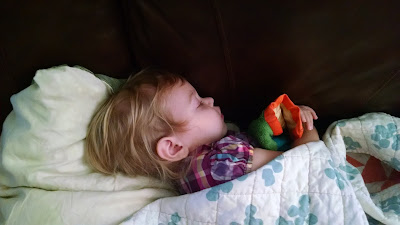 We've been sick.  Really sick.  All four of us.  My current theory is that we sent Luca to Kindergarten, where he picked up one of every kind of germ buffet-style and lovingly brought them all back to us to share.

I came down with a cold two weeks ago, but was feeling better by last Saturday.  Then Luca seemed to catch the same thing, but it rapidly turned into a swollen, red and crusty eye problem with lots of coughing, fever and miserableness.  We noticed the swollen, itchy eye Saturday night and took him to the Prompt Care Clinic Sunday morning for all the meds (antibiotics, oral steroid, steroid/antibac eye drops and the good cough syrup).  We put him to bed, but I was worried about him sleeping upstairs alone after giving him all of his meds, so he slept in bed with us Sunday night.  Which was good, because Isla, after sleeping for about an hour, woke up and promptly threw up all over her room (which is right across the hall from his).  I rocked her and read her stories while Michael cleaned everything up and by midnight we were all back in bed for a fitful night.  So it's really no wonder that I proceeded to come down with what Luca had (which definitely wasn't the same cold that I had started out with a week prior).  Michael caught it too...

So we all stayed home Monday, and Luca was feeling quite a lot better by Tuesday.  Since he'd been on the antibiotics for a couple of days we let him go back to school Tuesday, but he spent a little time in the nurse's office :(  He didn't have a fever and after resting a little while he felt better so they sent him back to class and he made it through the day (poor guy!  I didn't know any of that was going on until I picked him up).

We sent Michael off to work Tuesday, where he spent the day probably just as miserably as I did at home, except I had a comfy couch to crash on and he didn't.  I was feverish and coughing and my throat was so sore and I was so tired.  Up until this point, Isla had been doing quite well aside from the mystery puking incident, but she started to show some feverishness and decided that no food was palatable.

By Thursday I was back at the Prompt Care Clinic with Isla where she was diagnosed with an ear infection and possible strep throat.  So she got the good drugs too.  Oh by the way, she hates taking medicine and is really strong and stubborn.  But Luca is a medicine-taking champ and I think he's starting to rub off on her a little bit.

By Friday, neither Michael nor I was feeling much improved, and deciding that we didn't want to keep reinfecting each other, we gave in and went to the Prompt Care Clinic for the good drugs too.  He has bronchitis, I have a sinus infection.  I joked with the NP and said we should have all come in together so they could have prescribed the family size bottle of antibiotics.

Twelve prescriptions later and I think we're finally starting to come around.  I feel like we should install a hand sanitizer full-body mister at each entrance.  And maybe invest in an extra large package of those masks.  And hazmat suits.

I'm hoping we've had our sick for this semester at least and that with lots of scrubbing and disinfecting and vitamins we can keep another round of illness at bay.

Hoping you are well!  I wouldn't wish this on anyone...
Labels: Reflections