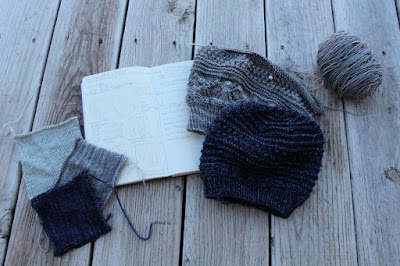 As promised, a post about my designing goals for the year.

In 2015, I published 8 new designs and revamped my oldest 4 patterns from 2014, bringing them in line with my shiny new Style Sheet and having them tech edited by my lovely TE.  I put together 2 separate e-books, or collections of patterns, to encompass a wider variety of sizes and provide a discount to knitters.  Feel free to peek around in my Ravelry shop.

I began 2016 with a really exciting experiment--designing and hosting my first MKAL (mystery knit along)--Bowties Are Cool MKAL Shawl.  In a nut shell, a designer creates a pattern, chops it up into 4-6 smaller sections, and releases these "Clues" over the course of several weeks.  Knitters sign up, not knowing much about what the finished object will look like but taking a leap of faith, and over the course of the MKAL they knit up each consecutive clue to arrive at a beautiful knitted thing.

About 250 people have signed up for my MKAL so far and this week marks the halfway point--with Clue 3 going out on Thursday.  Everyone has been so wonderful about sharing pics, asking clarification for any questions they have, and generally just being awesome!  It's been nerve wracking for me at times but also amazingly fun!

In conjunction with the MKAL, I will be releasing a companion collection of Dr. Who themed designs!  I've arranged it as a true e-book, so all of the patterns are included as they would be in a physical book you could purchase, which is a really exciting step.  It's off with my TE right now, and I'm fast and furiously knitting to get samples completed for the photo shoot.  I cannot wait to share this collection--it's coming together so well!

After the collection releases in February, I'm going to have to take a break for designing a couple of months.  We're hoping to be moving across the metroplex, so there will be lots of housework and packing that needs to get done in conjunction with that.  After that's all settled, I hope to jump back into designing.  Isla will hopefully be attending a preschool or mother's day out program in the fall, so that should give me a little more time to dedicate to designing too.

I have a few different ideas rattling around for projects to work on for the fall.  I have an idea for a family of sweaters with some lovely colorwork details.  I've chosen sport weight yarn in cream and Mad Tosh Rainwater for the men's version, hand dyed 100% DK weight wool in navy and a grey-green for the women's version, and I have several options on hand for the kids' or girl & boy options.

In addition to that, I can't get the idea of an accessory collection with an opulent, nouveau riche theme out of my brain.  Some of the titles for pieces in the collection might be "Fine China", "Old Money", "Thoroughbred" and "Golden Touch".  So many ideas, so little time!

I feel like if I even get half of that done this year I'll be doing well.  I love the idea of having about one new release per month, but I don't think this is the year for it.  I'll be releasing 5 patterns in February...so let's just say that about covers it until at least July, shall we?
Labels: My Designs