Inside the Artist's Studio

It all started with some crashing video drivers.  Which isn't an end-of-the-world problem, but it does get to be annoying when the computer just loses its marbles for no good reason and requires a reboot.
So Michael started looking at building a new computer from scratch.  Nice graphics card, big enough power supply, solid state hard drive, etc.  I think he thought it was just a pipe dream at first, but then I realized that if he got a new computer, I could have the old one for dedicated pattern writing purposes!  It always made me a little twitchy when Luca would get on the computer to play Minecraft and I had my latest design open, and the charting software, and a Publisher file and on and on.  I was always afraid something was going to get mixed up...like having a new pattern with a few lines of 'm's in it, because someone was leaning on the keyboard with the wrong window open and I didn't catch it before publishing...that kind of thing.

I encouraged him to go ahead and buy all the parts and build it, which I think surprised him a little bit.  But now we all know my ulterior motives, so it isn't really so shocking ;)  Luckily, he has a friend from work who enjoys building computers in his spare time and was only too happy to advise.  Parts were selected and purchased and the boxes began arriving a few days later.

As with so many projects, I expected it would sit around for a few weeks in pieces before finally coming together, but I was so wrong!  The day the last piece arrived in the mail, he pulled everything out on the dining room table and set to work assembling these various gadgets and gizmos into a working computer.  And do you know what?  It worked!  Right out of the gate!  Not that I was surprised, but seeing as how this is his first build and all...I wouldn't have been shocked to learn that some trouble shooting was necessary.  There were just a couple of tiny things that didn't quite go according to plan at first, but overall, it went together in record time and works so.much.better!  It boots up in seconds.  Seconds, people!  No waiting around while you really want to be checking your Facebook for the start up screen to go away ;) 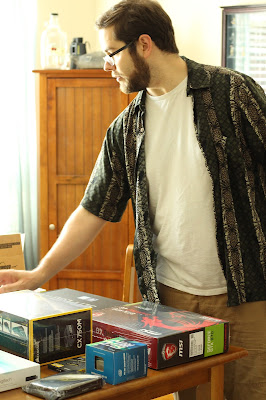 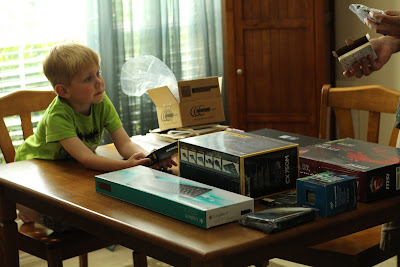 Now that Michael and Luca and their gaming needs are squared away, I had designs on the old computer.  It's fine really...it certainly doesn't boot up in seconds, but it's adequate for my needs and all of my designing software and files and pictures are already on it.  We had just moved our bedroom around, which somehow created massive amounts of open space, so it seemed only logical to set up a workspace in there.  There is room for the antique desk that my in-laws refinished for Michael during college and my grandmother's quilt rack that I occasionally change up to display one of my favorite quilts. I picked up a pin board and a dry erase calendar to help keep me organized.  It's nice that they're out on display and I can check my progress every time I walk by.

The corner became the perfect space for a pink wing backed chair that my mom gave us and a little round table and lamp to keep my knitting.  It's so lovely to come in and make myself at home while I work on my latest project or design. Isla has been enjoying playing some learning games on her tablet in my bed while I spend a couple of hours working--bless her heart!  She's so sweet to snuggle up and keep me company.  She's my very favorite co-worker ;) 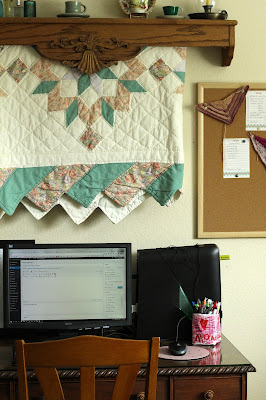 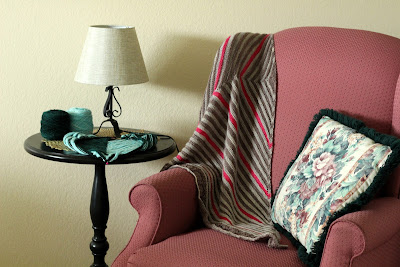 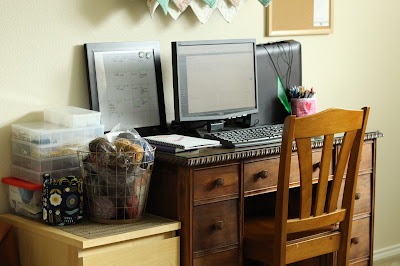 How about you?  Do you have dedicated work space?  Or just a corner of the kitchen table?  I'd love to hear about what works for you!  Please share in the comments!
Labels: Reflections