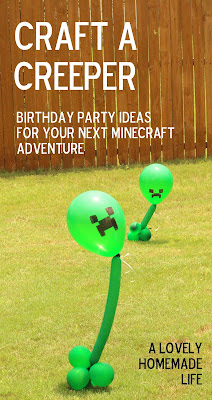 For Luca's Minecraft-themed 6th Birthday Party, we were looking for something that could double as an activity and a decoration.  I wasn't finding a lot of simple ideas on Pinterest that didn't require lots of supplies or prep time, so when this idea for creating a Creeper struck me, I knew it was exactly what I had been searching for.

We used these Creepers to decorate the house and snack tables before the guests arrived, and they were then used for the very last game of the party.  There were two main components to craft--the Gunpowder Beanbags and the Balloon Creepers.

I wanted to incorporate some of the Minecraft lore with a functional item we'd need to keep the Creepers tethered.  I asked Luca what materials Creepers drop when you kill them in-game, and he said "Gunpowder".  Bingo!  It just so happens that I've made a pyramid shaped bean bag before, so I knew how I could achieve the look of a pile of gunpowder, like in the game. The week before the party, I went to JoAnn Fabric for supplies. I found this perfect grey, nubbly knit garment fabric.  It didn't have much stretch even though it was a knit fabric so I wasn't concerned about my standard sewing machine and needles being able to accommodate it.  You could also choose a grey cotton fabric, but I really like the speckled look of this one and how it resembled the look of the gunpowder item in-game.  I purchased 2/3 of a yard, which was more than enough to make 12+ beanbags.  I also picked up a spool of black ribbon to form the loops that we would use to tie the balloons down.  The last supply I gathered was a bag of dry black beans from the grocery store. 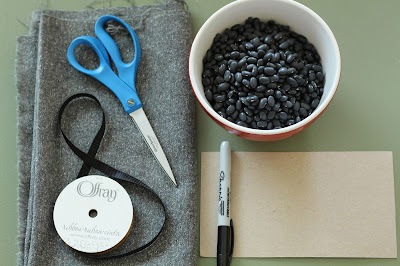 I cut out a piece of cardboard measuring 8" x 4 1/2" to use as a template.  I traced 14 rectangles onto the wrong side of the fabric with a Sharpie and cut them out. 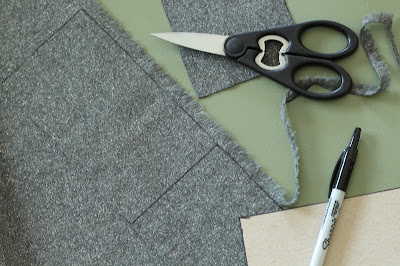 I used my iron to press one of the long edges down about 5/8", then I ironed a crease down the middle so that the fabric was in the shape of a square when folded on the crease. I cut a piece of ribbon about 2" long and folded it in half.  I placed it, cut ends out, inside the folded over fabric, as shown below. 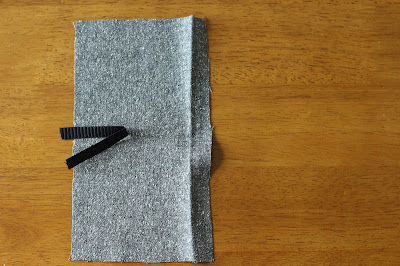 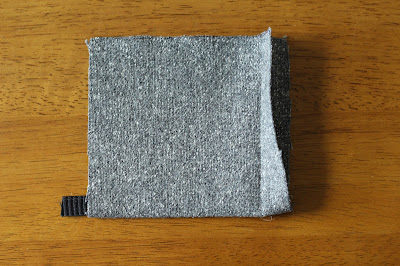 Then it was off to the sewing machine to sew 2 sides closed.  Leave the edge that has been ironed down open for filling.  Be sure to back stitch at the beginning of end of the seam to reinforce.  To make the 90* turn, make sure the machine is set to needle down position, stop at the appropriate point, lift the presser foot and gently rotate the piece, then continue sewing.  This allows you to trim off the corner to cut down on extra bulk without compromising your seams. 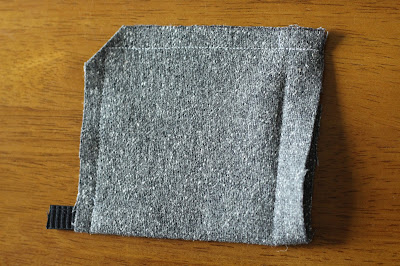 Once the pouch is turned right side out, fill about 2/3 of the way full with beans. 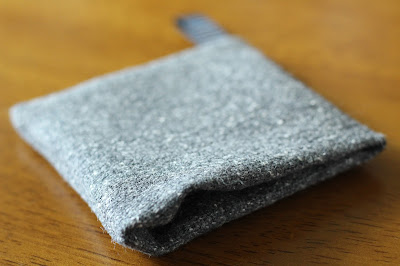 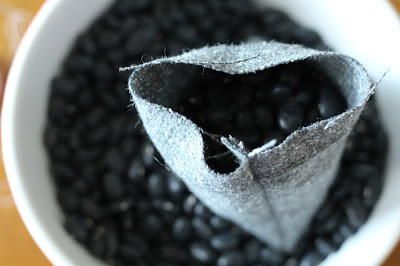 Now for the crucial step.  If you want your bean bag to be in the shape of a triangular pyramid instead of a flat square, you must offset the seam before you sew it closed.  If the seam that is machine sewn remains at the edge of the shape, your bean bag will be a square.  But if you center the seam against the opposite side of the bean bag, you end up with a pyramid!  Once you have the top edge lined up correctly, use a needle and thread to whip stitch the seam securely closed. 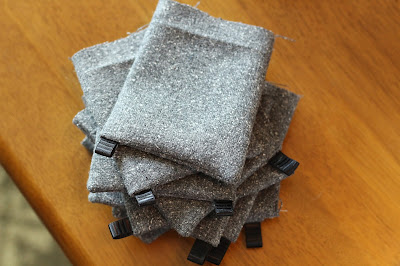 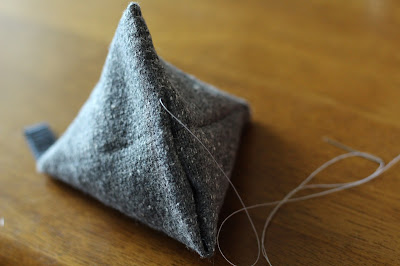 And voila!  A pyramid shaped "gunpowder" beanbag that doubles as a balloon tether for the second part of our Creeper! 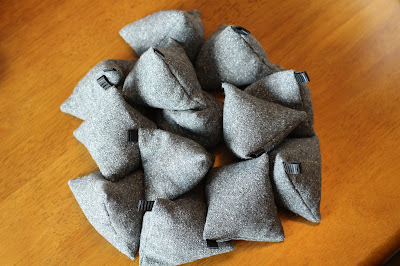 Craft A Creeper Out of Balloons

On the day of the party, I used the gunpowder beanbags I had made up the week before to tether the body of the Creeper that is constructed from a variety of balloons.  I purchased 5" balloons for the feet (4 for each Creeper), 12" balloons for the faces (1 each, filled with helium), and long, twistable carnival balloons for the bodies (1 each), all in green.  Unless you have an excellent lung capacity, I would recommend a small pump to fill the long balloons!  I ordered a package of them on Amazon as I wasn't able to find them locally.  The other balloons were purchased at a local party supply store. 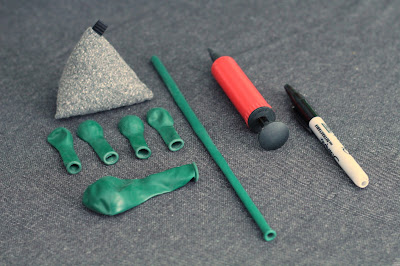 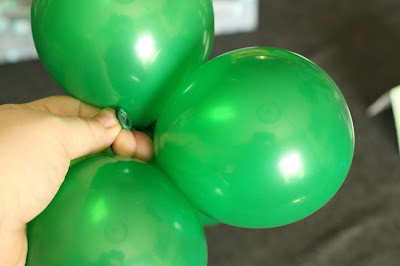 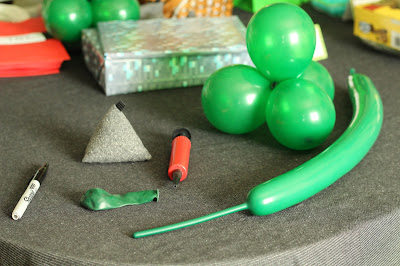 Blow up the long skinny balloon to the desired length.  I left about 10" of the end uninflated and used it to attach the body balloon to the feet cluster by wrapping several times around the center knot.  I then inserted the end of the long balloon through the loop in the gunpowder beanbag and tied a knot around the feet cluster.  The gunpowder is more or less hidden by the feet, and serves to keep the Creeper in place.  You really can't go wrong with this step--just as long as all of the ends are secured you can tie it however it makes the most sense to you. 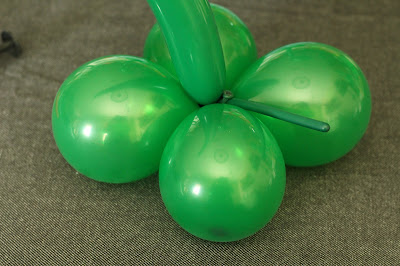 We took the large head balloons to the grocery store nearby where they will fill them with helium for a small fee.  Since we only needed about a dozen, this was simpler than buying a helium tank.  I tied the end of the helium balloon to the top of the Creeper body, then I drew the Creeper's face on each balloon with a black Sharpie. 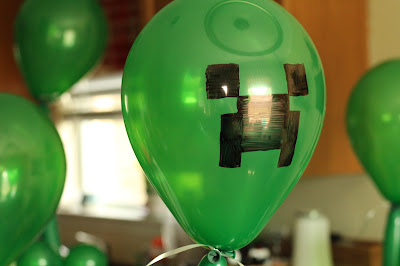 They made the perfect party decoration, and they were also lots of fun for our Creeper Marksmanship Game at the end of the party!  Check out the next installment of my series on throwing an easy and fun Minecraft birthday party for all the details about the games and snacks! 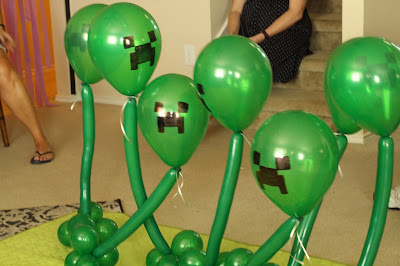